The Expendables 2 (2012) – On Set Pictures Courtesy Of Alliance Films 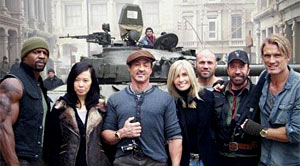 Alliance Films just released new pictures of some of the baddest men in Hollywood who currently star in The Expendables 2 (EX2). On a $100 million budget, the principal photography began on September 29, 2011, focusing on stunts while the central stars began filming early October.

In the new on-set pictures from EX2, we get a glimpse at half of the main cast (Sylvester Stallone, Dolph Lundgren, a beefed-up Terry Crews, retired MMA fighter, Randy Couture, Nan Yu, and even Chucky Norris). Check out the pics, and let us know your thoughts on EX2 in the comment section below.

The Expendables are back and this time it’s personal! After Tool (Mickey Rourke), the heart and soul of the Expendables , is brutally murdered on a mission, his comrades swear to avenge him. They’re not the only ones who want blood. Tool’s beautiful young and wild daughter Fiona embarks on her own revenge mission, complicating matters when she is captured and ransomed by a ruthless dictator plotting to destroy a resistance movement. Now Barney and the Expendables must risk everything to save her and humanity.