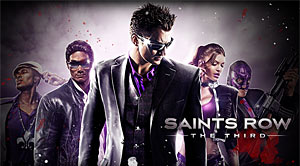 If imitation is the sincerest form of flattery, what is parody? The Saints Row franchise has long been known for its many excesses, both in its over the top action sequences and cheeky nods to other open-world crime simulators. The Saints proudly wave their collective dicks (and boobs, ass, and other assorted naughty bits) in Grand Theft Auto’s face and mercilessly mock the reigning champ. Of course, a sense of humor will only get a game so far. Without solid gameplay to back up its acidic barbs, can Saints Row The Third make a dent in GTA’s market share? The question facing gamers is: Is it better to spend your hard-earned cash on the imitation… or pick up any recent GTA game and take it for a spin instead?

I’m assuming your cash was hard-earned. If you’re like me and you spend your days beating up random strangers on the street in the faint hope that a pile of spinning greenbacks will magically spill from their corpses… but my lawyer is advising me to shut up at this point. And he’s a really good lawyer. He managed to keep me out of jail for not reporting that Bambi The Rhino Horn Sniffing Hooker had expired on the crapper. What? How was I supposed to know that smell wasn’t some variant on her usual aroma? Eau De Hooker isn’t exactly that wildly different from decay, ya know? Back me up on this, replacement running gag whore!

I got a good feeling about this one. She hasn’t tried to smoke my powdered Venezuelan monkey testicles yet.

This is Yell! Magazine’s review of Saints Row: The Third, available for PC, PlayStation 3, and Xbox 360. For review purposes, the PC version was used. For whining and moaning purposes, console fanboys should talk to the hand. Preferably the left hand, the right is my pimp hand and I may need to use it on Brandy before this review is over. Maintaning a solid pimp hand is the cornerstone of every good hooker/hookee relationship.

To say that Saints Row has a story is a bit like claiming that your average David Lynch movie has a wholly coherent and easy to follow plot. In essence: popular, media-friendly gang of hoodlums gets replaced by new kids on the block, mayhem and general silliness ensues. You start off the game by creating your character, picking from a wide variety of looks, clothing, body types, and several items that make absolutely no sense at all but fit in perfectly with Saint Row’s bizarre world. I designed my character to resemble my real-life self down to the smallest detail.

You think I should get these pixels looked at? They’re starting to itch.

Following a hilarious, not to mention profanity laced, 2001: A Space Odyssey-scored Star Wars-type opening scroll, the game opens with a daring daylight robbery. I say daring not because the plan to steal the bank’s money is in any way, shape, or form intelligent. Rather, a trio of Saints, yourself included, barge into the building, shoot anything that moves, while occasionally stopping to sign autographs, attach helicopter cables to the vault and pull the whole shebang out through the roof as if it were the most natural thing in the world. Saints Row wastes no time in displaying its unique brand of tongue in cheek, self-aware humor. While waiting for the vault to clear the roof, a cohort asks, “How long is this going to take?” You nonchalantly reply, “Oh, about two waves of SWAT guys.” Unsurprisingly, you have to clear exactly that many waves of SWAT guys before the plot moves forward. Later, while hanging on for dear life on the airborne vault, police helicopters order you to, “Autograph and THEN drop your guns!” while also asking for Shaundi’s phone number.

To be fair, I would let her play with my powdered monkey testicles all day long. The non-powdered kind too.

The gang’s “cunning” plan fails, to the amazement of no one in particular, and the trio of hapless fools are soon brought before the new crime boss to be told what time it is. To the amazement of everyone, turns out it’s the time to jump out of a perfectly good airplane through its rear hatch, have a mid-air shootout with parachuting bad guys, catch the free-falling Shaundi, subsequently drop the babe to have both hands free to shoot at previously mentioned plane, which is now trying to ram you, zip through plane’s shattered windshield, kill several more bad guys while passing at high speed through plane’s interior, fall out rear hatch a second time, participate in second mid-air gunfight, catch Shaundi yet again before finally bringing this sequence to a close. Wanna know what your faithful and altogether spectacular reviewer calls this?

If you can stomach this kind of outrageously ludicrous action sequence repeated ad nauseam, then Saints Row: The Third just might be your kind of game. Personally, I can’t stomach this sort of action-movie machismo for more than an hour or two at a time before moving on to something more productive. But as a turn-off-your-brain time-waster, Saints Row has no equal. The one-liners fly fast and furious, the game is constantly introducing some new distraction or gameplay quirk to keep you entertained and, overall, even the most jaded game reviewer will have to give Saints Row credit for its sheer, balls-to-the-wall commitment to its own insanity.

And the same plastic surgeon, apparently.

Saints Row: The Third won’t win any awards for writing or originality but, then again, it’s not even trying to. To search for deep, philosophical thoughts in this game is to miss the point entirely. Saints Row is vile, crude, and brimming with attitude. Love it or hate it, it makes an impression.