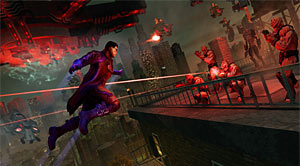 Today, Aussie’s will be pissed to hear that the Classification Review Board has rejected Saints Row 4 for reclassification because drug use in the game is still problematic.

“Smoking the ‘alien narcotics’ equips the player with ‘superpowers,’ which increase their in-game abilities, allowing them to progress through the mission more easily. During the mission, onscreen prompts guide the player to ‘Go to deal location’ and ‘Get drugs.'”

Aussie’s looking forward to the next installment in the Saints Row series shouldn’t give up just yet since an edited version is still in works and will be reviewed in the near future.

Keep them hopes up!