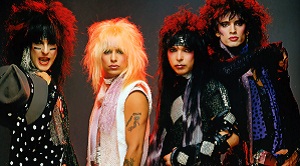 A lot of people around here [La Crosse, WI] liked my article about my experience on the Hinder tour bus.

The band, however, didn’t seem too appreciative.

Hinder came back to town this past May, and at the meet-n-greet, one of the guys mentioned Reese’s Pieces to me, and I, of course, laughed a bit and asked if they’d read the article.

The drummer said, “Yeah… my fiance asked me about it”

He kinda laughed about it and I apologized, but I’m guessing I won’t be invited back on their tour bus anytime soon. That’s OK. I still think they’re great guys and I had a blast that one night.

Which is a lot different than some run-ins that I’ve had with other “rock stars.”

I didn’t necessarily get into the business of radio to meet musicians, but I definitely wanted free tickets to concerts. Getting backstage and meeting bands is a small perk. VERY small.

The backstage experience isn’t anything like a Poison/Motley Crue/Winger video. [Editor’s note: Did Brian just reference Winger? Brian needs to change his name to Stewart.] Not anymore, at least. There’s no line of hot chicks waiting to suck bouncers off just for the chance to suck off a bass player. I’m not saying that it doesn’t happen, but a lot of people have this preconceived idea of what it means to “get backstage.”

People are always asking me to get them back there too. I don’t quite understand why. The best backstage experience I’ve ever had was when I was working for Rock 101 in Manchester, NH. We were broadcasting live from Gillette Stadium in Foxboro, MA, for the Summer Sanitarium show: Metallica, Linkin Park, Deftones, Mudvayne, and Bizkit. The ONLY reason that this is my favorite backstage experience is because I met Kirk and Lars. Being the huge Metallica fanboy that I am, it was top notch. But there wasn’t anything all that special about it. We were in a tunnel under the stadium, and the concert management would bring out a few artists at a time, shuffle them from radio station to radio station, and then put them back in their dressing room.

No booze. No girls. No weed. No nothing.

Another great backstage experience was at a “glam” show at the Hampton Beach Casino in Hampton, NH. Once again, I was there for Rock 101. My only job was to introduce the bands. I can’t remember all the bands, but I know that it was Vixen and Vince Neil. Vixen was the opener, and after they got off stage, I was hanging around, waiting to intro the next band. I was talking to the ladies of Vixen as they were packing up their stuff. I asked if they were staying the night, and they said that they were getting on their bus and getting out of town since they had the next two nights off.

So, I intro the next band, and as I come back down the stairs, Vixen is nowhere to be found. But their dressing room is open — and fully stocked.

Yes, I helped myself to Vixen’s meat and cheese tray, their veggie tray, and a BUNCH of their imported beer. I also walked off with a bottle of Crown Royal. I don’t even drink that shit. But I figured since it was “free,” I might as well take it. I had me a one-man party in Vixen’s dressing room and it was spectacular!

Whatever you do, don’t put a flash in Vince’s face…