Is There Going To Be A John Corabi Project With Mick Mars? 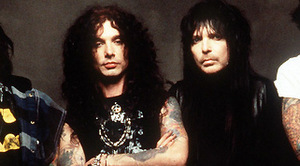 When you hear about such collaborations so far in advance, the last thing you end up hearing about them is the bottom falling out, which is why we’ll take this news with a grain of salt. But the idea of a John Corabi collaboration with Mick Mars does sound pretty cool.

If you’ve heard the self-titled 1994 Mötley Crüe album, then you know that the songs were tight and, if that’s all you’ve heard of the one-album Motley alum, that Corabi is a formidable frontman. But if you lived that era, then you remember laughing at the album and the lack of Vince Neil.

Obviously the members of Mötley Crüe are a bit busy with the final year of their Farewell Tour, so any future projects for the band members are on hold for a time, a fact Corabi recognizes. Corabi also said of the possible collaboration with Mars:

A lot of people already know about it. Mick and I have had some discussions about possibly going in and doing a record, and maybe going out and doing some shows… I was just talking to him the other day. So we’ll see how that works out.

What do you think of a possible album between Corabi and Mars? Is it something you’d be interested in?