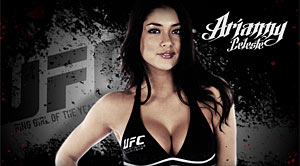 Don’t be silent. Please Yell! your opinion in the comments section below.

Chael Sonnen knows how to pick a fight, even if it is misaligned. Sonnen is good at picking fights, and it seems that the UFC middleweight has taken a break from taunting Anderson Silva. Instead, Sonnen has turned his attention to him; she’s gorgeous. But wait, he’s not thinking like that. He’s actually attacking Arianny Celeste’s intelligence. Here’s what he said when asked who he’s supporting for the Ring Girl of the Year award at the upcoming World of MMA Awards:

We only had one and that was Chandella. The other was the IQ card girl. Arianny kind of walks around and holds up her latest test score. One time when there was a title fight, she got all the way up to five and we were very proud of her.

The two ended up taking this fight to Twitter in a series of comments that have since been removed.

OK, it’s one thing for Chael Sonnen to tease and taunt his fellow fighters, but to actually attack a ring girl? What the fuck? That’s just straight up bullying. That’s like Oscar The Grouch crapping all over Elmo. That’s like Selene (Underworld) having a bad day all over Edward (Twilight). That’s like Dave Mustaine calling out Coldplay and challenging them to Battle of the Bands.

Even if it is a transparent publicity stunt to garner attention for the upcoming World of MMA Awards that Chael is hosting, this isn’t the WWE. While Chael does remain an interesting character in the UFC, he should learn to strategize a bit better and learn how to say “No” to those who script the UFC… it is scripted, right? ‘Cause watching Chael is like watching Days of our Lives.

At this point, Sonnen makes about as much sense as The Ultimate Warrior.