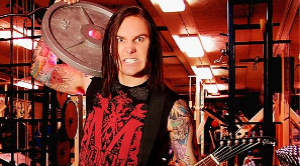 It’s brutal, fast, and hilarious, which is what Austrian Death Machine is all about. If you love Ahhnold, metal, and Christmas, then this is single for you. Why is it that the funny bands are often totally awesome at producing some killer tracks?

The one and only Austrian Death Machine spent some time in the studio recently, mostly to lift weights, but also to record a few new songs. The songs are based on the ultimate Holiday movie, Jingle All the Way, which stars Ahhnold, of course! The songs are a regaling tale of the pursuit of a one “Turbo Man” doll, sung by Tim Lambesis and Ahhnold.

Jingle all the Way Track Listing:

“I’m Not a Pervert”
“It’s Turbo Time”
“Who Told You You Could Eat My Cookies?”

The digital version of Jingle All the Way will be available for download wherever downloads are sold as of December 6, 2011 and the limited 7″ vinyl single will be available shortly thereafter and can be pre-ordered now. This piece of vinyl will be the perfect stocking-stuffer for the most brutal of friends and family. Ahhnold only asks that the vinyl not be gifted to “puny wimps” or “girly men.”

Guitar solo on “I’m Not A Pervert” by Jason Suecof and Eyal Levi
Guitar solo on “It’s Turbo Time” and “Who Told You You Could Eat My Cookies?” by Mark MacDonald
Rhythm guitars redone by James “JP” Gericke
Drums redone by Jerad Buckwalter
Vocals by Tim Lambesis
Ahhnold by Josh Robert Thompson (It’s Turbo Time) and Chad Ackerman (I’m Not A Pervert)
Tracked and mixed at Lambesis Studios in San Diego, CA
Mastered by Alan Douches at West Westside Music