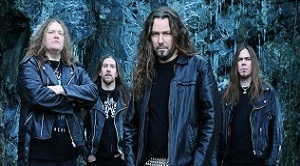 Sweden – Legendary Swedish Viking/death metal masters, Unleashed, have posted an update from Chrome Studios in Sweden, where the band has finished recording its upcoming album.

“We are now ready with most of the recording, final vocals were done last week and we are very satisfied so far. We will now spend some real time on mixing this and creating a crushing sound. Anders [drums] just asked me if this might be the fastest unleashed album to date. I’m not sure, but it’s likely close anyhow.”

The upcoming album was produced by Unleashed’s lead guitarist, Fredrik Folkare, and will see a spring 2012 release on Nuclear Blast Records.