The Best, The Worst, The Shape: A Recap Of The Halloween Franchise 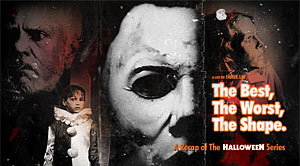 This movie’s main downfall was the fact that it was marketed as a film in the Halloween franchise. What the fuck? This movie wasn’t even remotely about anything to do with Michael Myers, Haddonfield, or… well, anything that would make you want to watch it really.

Though it was marketed in the Halloween franchise, Halloween III: Season of the Witch is about androids, Samhain, and witchcraft — these plot elements just happen to sync up in some bizarre plot to kill children on Halloween night. If you’re asking “what the fuck?” right now, join the club. We have jackets. Even all these years later I am still so baffled as to why John Carpenter and Debra Hill didn’t want to go with a direct sequel to Halloween II with now Michael Meyers (even if they had nothing to do with the end product).

Truth be told, however, Carpenter never wanted to return to the Michael Meyers plot; he intended to release a new film in the “Halloween” franchise each year with a different story. However, as a result of dismal box office results the studio put a road block in front of Carpenter and Michael Meyers was reborn.

The only good thing to come out of this movie was Paul Rudd. The end. No, but not really. Paul Rudd takes on the role of Tommy Doyle (Laurie Strode’s young charge from the original Halloween flick) and seeks great vengeance upon the man that has probably caused him a lifetime of mental trauma. That sounds like a decent plot, right? Sure it does, until you factor in a major twist that I am about to completely spoil for you: Michael Myers knocked his own niece up. Feel free to take a minute to re-read that a few times before soldiering on with me.

Alright, so that little bit of knowledge having been dropped, the movie isn’t just about Tommy Doyle looking to beat the crap out of Michael Myers for tons of murders, various other crimes, and one serious sin against nature; if you’ve already guessed that he’s going to stop an actual curse/bizarre cult, you’ve guessed correctly! The supernatural theme doesn’t work so well here and it gets even more outlandish by the end of the film. It saddens me to think that the late Donald Pleasence (Doctor Loomis) took part in this hateful shenanigan.

Halloween: Resurrection brings us Busta Rhymes, the hot mess that is Tyra Banks, and a plot so weak that it makes Breakin’ 2: Electric Boogaloo look like James Lipton should be interviewing it’s stars. Jamie Lee Curtis bravely reprises her role in it’s most contrived form yet, in what is little more than a cameo — one which she was probably relieved to have finished filming.

The plot revolves around several sexy college co-eds competing in an Internet reality show in which they have to spend a night in the childhood home of little Mikey Myers and figure out what led him to kill. They’re given clues, separated into groups, etc., sound predictable? It is. Sound scary? It’s not. This movie brings us the worst of all the Halloween film casts put together and seems only to represent itself as a lame attempt to cash in on what I wish had been a passing trend.

The Return of Michael Meyers deals with The Shape stalking Jamie Lloyd, daughter of Laurie Strode, who for some reason was adopted LOCALLY by a nice family. I guess you could rationalize that back in 1988, adoption agencies were a little more slow than they are today and might not have thought to get Jamie Lloyd adopted somewhere besides Haddonfield, Illinois. Call me a stickler for details, but that’s plot hole numero uno for this writer.

The film follows a somewhat contrived plot that ends strangely and is further elaborated upon in The Revenge of Michael Meyers. Once again, the Halloween series makes a wrong move into left field by introducing telepathic powers into the plot. I could make a lame weakest-link joke here, but I truly feel that these two movies are examples of what poor sequels are.

With a franchise as successful and as large as Halloween‘s, you’re apt to have one or two that are bad, but the fact that they kept delving into supernatural territory tells me that the various writers through the years must have thought, “If you don’t at first succeed, try, try, try again”‘ Do us a favor in the future guys? Stop trying to force the supernatural angle. It’s not happening!

I had a tough time deciding where to put the follow-up to the 2007 reboot, so I decided just to give a nice, safe honorable mention. Here’s to you, Halloween II, for not sucking or being that great either.

That brings us to the end of this recap of the Halloween films. And hey, don’t let my opinions stop you. One man’s trash is another man’s treasure. Just remember not to have too much premarital sex or smoke too many doobies this Halloween, or you may run the risk of having an emotionally disturbed manchild come after you. But again, don’t listen to my advice. Something tells me that some of you little freaks might enjoy it.