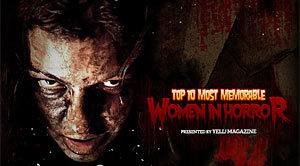 Mylène Jampanoï is another French actress who you could have mistaken as a star from an Asian horror film, but nope! Mylène starred as Lucie Jurin in Martyrs, another French horror film directed by Pascal Laugier that is part of the new era of French horror cinema upping other films like Frontier(s), Calvaire, and Inside in terms of the level of violence it portrays. It’s actually interesting that we featured two actresses from France in the horror genre when you know the country produces less then three horror films a year. But they’re always so damn good! They surpass any expectations from previous releases, so hear it from us, you just can’t go wrong with French horror.

Lucie Jurin (Mylène Jampanoï) was tortured at a young age for a lengthy period of time, and escaped the mysterious perpetrators. Fifteen years later, she tracks them down, and kills the entire family with a double-barreled shotgun. This is the first half of the film, and this is where Mylène Jampanoï shines. Without even knowing how she was tortured you could always sense something really bad happened to her character Lucie. You feel her anger, and her motive to carry out justice. But it doesn’t end here, she is still tormented with her memory of leaving another victim behind, which continues to haunt her as a disfigured women. She finally splits her throat with a carpet cutter.

With all that said, Mylène Jampanoï pulls off one of the most intense, and aggressive female roles I have ever witnessed in a horror. Move over Natasha Henstridge, the number 6 spot belongs to Mylène.

Didn’t it scare the crap out of you saying “Candyman” five times in front of a mirror in the early ’90s? That was also used for the main marketing concept for Clive Barker’s Candyman, directed by Bernard Rose and starring Virginia Madsen as the protagonist and Tony Todd as the villain. It worked extremely well, earning Candyman critical acclaim and hitting box office success.

I was always fascinated with how Virginia Madsen’s Helen Lyle seemed to evoke Marilyn Monroe’s look. As a graduate student conducting research for her thesis on urban legends, Helen discovers the story about a local legend in Chicago called Candyman. She’s intrigued by him, enough to call out his name five times as per the legend so summon. Wrong move Helen! This is when shit starts to go down, and Candyman goes on a killing spree to destroy the people Helen encounters along her curious journey.

As of today, Candyman remains a horror legend among us fans, and still tops modern slasher flicks. Virginia Madsen was a perfect fit for the role, winning best actress at The Saturn Awards in 1992.

If a reboot came along, it would be extremely hard to top Virginia Madsen’s performance. For this, Virginia Madsen earns herself the fifth spot on our list of the most memorable women in horror.

Frankenstein Must Be Destroyed (1970)

A former model-turned-actress, Veronica Carlson had small parts in some films before appearing on the cover of the Sunday Mirror and catching the attention of James Carreras, Hammer Film chairman. As fate would have it, Veronica went on to become Hammer Film royalty, starring in three Hammer Films in a span of just three years: Dracula Has Risen From The Grave (1968), Frankenstein Must Be Destroyed (1969), and The Horror of Frankenstein (1970).

Starring in these three films also allowed her to not only be forever immortalized in the company of Christopher Lee, Peter Cushing, and David Prowse, but also puts her on our list of the most memorable women in horror.

Veronica’s role as the docile, submissive Anna Spengler in Frankenstein Must Be Destroyed epitomized what it must have been like for a woman back in 1969. Forced into a situation involving her fiance, Karl (Simon Ward), and Baron Frankenstein (Peter Cushing), her role was pivotal in the body snatching coverup and fooling the bobbies when they make their rounds searching for Frankenstein.

Her character might have been stronger than it appears, as she endures insults, such as Frankenstein’s insistence that she remain with them because he needs someone to bring him his coffee. Does Karl defend her? Hell no! He’s at some level terrified of the Baron… or at least has a morbid curiosity greater than his respect for Anna. Then Anna gets raped by Frankenstein and the following scene continues to work alongside him and her fiance, not saying a word and suffering in silence.

Though not a monster or a menacing character, Veronica’s Anna was gorgeous, caring, sympathetic, and crucial to the film.

The Woman is definitely the most thought-provoking horror film of the year. Nothing can top it right now, not even The Human Centipede. You won’t feel grossed out, or even shocked with the torture Pollyanna McIntosh faced as “The Woman.” We have seen all of these graphical moments before in horror films like Ichi the Killer, Hostel, and even Martyrs.

But if you’re a guy watching this, you will feel like garbage and a useless pile of shit. Every moment you have felt helpless and sorry for yourself in your life will hit you hard again after viewing The Woman. I’d have to say that Lucky Mckee and Jack Ketchum have successfully got their message across to us, and have created a new horror masterpiece. When a film like this causes an audience to react disturbingly during the screening, you know it’s likely a GREAT horror; one that but shouldn’t be seen by a person who isn’t open-minded.

Now back to Pollyanna McIntosh who is simply brilliant as “The Women.” Since this role doesn’t require her to speak much, and when she does you won’t understand a thing, the performance really lies all on her facial expressions, and so she beginnings to face a nightmare in a so-called civilized society. From every tear she makes to every scream you hear, you will feel her agony and her need to escape from the dominant male figures (father and son alike). As difficult as it must have been to shoot a film like this, Pollyanna sets new horror standards for female actresses, and she kills it in The Woman.

So Shelley Duvall had issues on the set of The Shining, and had frequent arguments with Stanley Kubrick. Jack Nicholas even stated that Kubrick was a different director when he worked with Duvall. I still remember that scene in the Making The Shining documentary where she couldn’t get that damn door open, and Kubrick flipped out on her. I kinda felt sorry for her because you can tell in later interviews that she was really hurt by the entire experience. I believe The Shining still holds a world record for the most retakes for a single scene. It took 127 takes to nail the famous baseball bat scene.

I’m pretty sure Duvall must have had some thoughts of swinging that bat over Kubrick’s head at some point. She later stated that working with Kubrick on The Shining brought her more knowledge than any of her earlier films had. For having gone through hell in making The Shining, and for bringing Wendy Torrance to life makes her the second most memorable woman in horror.

Everyone who admires the horror genre, and has been watching it their entire life has to thank the parents of Linda Blair for chasing down Warner Bros.’ casting department to introduce her for the role as Regan MacNeil in The Exorcist. Since the role was so terrifying, other candidates like Denise Nickerson pulled out because of the disturbing material attached to the young character. Blair was finally selected over a field of 600 applicants for the most memorable female role in horror in history.

As you may already know, Linda Blair is Regan, a 12-year-old girl without any problems in life until she starts showing signs of aggression, and eventually looking like a monster straight out of hell. Reason being, she is possessed by demon Pazuzu (have a quick glance at Evil Argento’s profile picture to see how terrifying he looks). Father Lankester Merrin played by Max von Sydow is called on by his superiors to perform Regan’s exorcism with Father Damien Karras (Jason Miller). Having faced the demon before, Father Merrin is fully aware of the dangers involved, and risks in performing the exorcism.

Linda Blair won an Academy Award for Best Supporting Actress, and was nominated for two Golden Globe Awards in 1973. The Exorcist has been on more horror lists than any other movie mentioned, and still remains the scariest of all time. No arguments can be placed on our choice for Blair, which merits her the Number 1 spot on our list.

Our honorable mention goes out to Jamie Lee Curtis for being so awesome in John Carpenter’s Halloween. She still remains the most favorable female actress in a slasher, and honors the name “scream queen.” She also inspired many other actresses known in the horror genre like Neve Campbell, Jennifer Love-Hewitt, Sarah Michelle Gellar, and Danielle Harris. If this list wasn’t created by this writer, Jamie Lee Curtis would have easily ranked in at the Number 1.