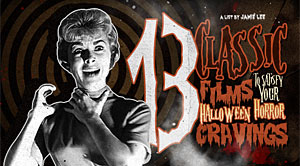 Before we get started, I just want to say that this is my view on the best classic horror films and not the ULTIMATE list. If you read this and start to think, “Hey, why isn’t such and such movie on this list?” don’t feel bad. I had a lot of options. Too many options. If I had wrote about every single movie I had come across that I wanted to showcase, we’d be here until January — and I wouldn’t dare deprive you Americans of turkey or presents for you shameless gift hoarders or the dark rites for… well, those of you who worship something else.

That being said, I hope to introduce some timeless classics to people who might not have otherwise given them a second thought or maybe reintroduce a few oldies but goodies.

It seems like fewer and fewer people these days truly recognize anything that was popular before the mid to late ’70s, if that — especially not horror from before then. Those who are about to die in classic horror movies, we salute you! I’m kind of cheating with this one. I promised myself that I’d only showcase pre-1970 movies here, but I honestly love this movie too much not to include it. If you smoke a lot of pot or use hallucinogenic drugs, or really any other kind of drug that does something for you, don’t see this movie while on that substance. Wait, scratch that. Do it. Take a little more than usual, watch this movie, and get back to me in the comments section. No, but seriously… drugs are bad, mmmkay? And that’s the whole point of this movie!

Awakening of the Beast is the brainchild of Brazilian actor/filmmaker Jose Mojica Marins, also known as Coffin Joe. He appears as both himself and Coffin Joe in this film. Coffin Joe was the prominent character in a horror movie trilogy (At Midnight I’ll Take Your Soul, This Night I’ll Possess Your Corpse, and The Strange World of Coffin Joe — check ’em out!) and makes another appearance here.

The first part of this film starts out like a black-and-white PSA about drug use and the horrors of the devil’s hallucinogens. Dr. Sergio, a psychiatrist, appears on a TV show with three other panelists to discuss the LSD experiments he has supposedly performed on four volunteer drug addicts in order to support his claim that drugs cause sexual perversion. He presents a series of documented events that he recounts to his colleagues who argue against his case. Dr. Sergio gathers the four volunteers, and after an injection, instructs them to stare at a movie poster (it just so happens to be The Strange World of Coffin Joe).

Now, if you’ve stuck with the movie for this long, the payoff comes around this part. The movie switches to a psychedelic panel of colors, and the events of the film become surreal and delirious. It’s shades of Alejandro Jodorowsky, except with a distinct exploitative feel that will leave you confused and oddly intrigued.

Although this film was made as a documentary, it’s more of a horror film than it gives itself credit for — and a damned good one at that.

Benjamin Christensen set out to make a film about how superstition and undiagnosed mental illness fueled the hysteria of the witch hunts. Part one of the film catalogues the appearances of witches and demons using some of the most bizarre paintings, woodcuts, and photographs that you’ll ever lay eyes on. The second part of the movie features a series of theatrical, dramatic vignettes that retell tales of medieval superstition and beliefs, including Satan himself joining in on the action by luring a woman away from her marriage bed and wreaking havoc on a group of monks. Sounds like a good time to me!

I won’t ruin the last two parts of the film, but instead I’ll tempt you into watching it by adding that the film was banned in both Denmark and the U.S. for what were considered graphic depictions of torture, nudity, and sexual perversion. The countries that allowed its showing cut it heavily. A bit of a shame considering that the film cost two-million Swedish kronor to make — unheard of in 1922. Luckily it’s now a public domain film that you can see for free right now on YouTube! Gotta love those common property laws.

Based on Lafcadio Hearn’s collections of Japanese folktales, this J-horror flick from way back focuses on four horrific tales that are sure to chill your blood. Even though it’s described as a horror film, Kwaidan doesn’t rely on blood or gore to carry it. It’s more of an expressionist venture than a horror effort, but with the backlit, fairytale-like set and strange ambient noises, it’s hard not to be a little frightened while you’re watching.

Probably the most well-known Japanese folktale included in the film is “The Woman of the Snow,” or the tale of the yuki-onna. In traditional Japanese folktales, the yuki-onna is a beautiful young woman who appears during snowstorms/snowfall and preys upon unsuspecting mortal men. It’s a little formulaic for horror by today’s standards and deadly women in fiction is nothing new at this point, but there’s something distinctly spooky about the tale of the yuki-onna.

I won’t lie; the stories of Kwaidan are somewhat predictable, but the more keen observer will appreciate the beauty in this piece of cinematic high-class horror.

Everyone’s favorite killer clown makes an early appearance in Spider Baby. Captain Spaulding (aka, Sid Haig) plays Ralph Merrye, a carrier of the Merrye Syndrome. (Clues that your family is screwed up: When your family has a syndrome named after it.)

The Merrye siblings live in an old, decaying mansion along with their guardian/chaffeur Bruno (Lon Chaney Jr.). Their unique syndrome makes them regress mentally, socially, and physically starting at puberty. The siblings, Ralph, Virginia (Jill Banner), and Elizabeth (Beverly Washburn) come from a long line of inbreeding and exhibit extreme signs of madness, all while managing to be delightfully and childishly playful.

If that doesn’t sound as disturbing as it should, let me reinforce it with some examples: Virginia is the titular Spider Baby because she enjoys trapping her victims in her “web” and “stinging” them to death with two butcher knives. One of the first kills in the movie happens almost immediately when Virginia does just this to a delivery man and keeps his ear as a trophy in a box. Ralph (played comically, weirdly, and more than a little creepily by Sid Haig) is, ahem, a sexually charged simpleton who traverses the house via a dumbwaiter. I wonder if they make medications for that sort of thing these days.

The plot thickens when greedy cousins Peter and Emily come to take possession of their land by becoming the childrens’ legal guardians.

Though it’s absurdly funny in some places, perhaps without intentionally being so, Spider Baby manages to be a solidly freaky and kitschy horror flick that perfectly encapsulates the more schlocky and comedic horror of the decade.

The further down you get on this list, the more you’re going to realize what a wetty I have for psychological horror. This is another movie that showcases that particular brand of fright; I’ve always been one for scares that will mentally damage you to the point of long-lasting neuroses, rather than maniacs in rubber masks with cleavers. That being said, Whatever Happened to Baby Jane? is easily one of the best tension-filled movies of the ’60s. It gets even better when you consider that off-screen the two stars of the film, Bette Davis and Joan Crawford, absolutely loathed each other.

The story starts in 1917. Baby Jane Hudson is a vaudeville child star, performs for large crowds, and even has an expensive doll made in her likeness. She’s also a spoiled brat with a very jealous sister. Jumping forward to 1935, both sisters are now stars, but their roles are reversed: Baby Jane’s sister Blanche (Joan Crawford) is the one who performs for her adoring fans, while Jane’s films have flopped. Jane (Bette Davis) has taken to drinking to cope with her lack of stardom.

One night after a party, the sisters is in a car wreck, though it’s unclear which of the sisters was actually driving the car. Blanche becomes crippled from the waist down. In the present, Jane and Blanche have both retired. Though Blanche is crippled, she’s the considerably more well put-together sister; Jane is a mean alcoholic who wears horribly caked-on makeup. Jane abuses Blanche, who is now dependent on her, in a variety of cruel and twisted ways that make you cringe.

Although the roles are campy, Crawford and Davis act them well and still manage to deliver a punch. It’s truly a gothic horror tale at it’s finest, right down to the sets. Not to mention, this is an infinitely quotable film. I’ve made myself a promise that if my burgeoning career as a writer fails, I’m going to open Baby Jane’s Discount Liquor, and any customers who say, “But you are, Blanche! You are in that chair!” will get the aforementioned discount. Remember this, dear readers. Come get your hooch at Baby Jane’s Discount Liquor!

That’s right, I’m making this a triple baby countdown, just to annoy TheMatt, who hates threequels — and probably babies too.

Rosemary’s Baby takes every woman’s most primitive fear and wraps it up neatly with a bow. The idea of having anything wrong with your unborn fetus would be nightmare-fuel for most women, but poor Rosemary (Mia Farrow) truly gets the short end of the stick in this classic tale of Satanic rituals, kooky neighbors, and every mother’s worst nightmare.

Rosemary and actor husband Guy (John Cassavetes) have just moved into the Bramford, a 19th-century Gothic New York apartment building. Their nosy-ass neighbors, the Castevets (Ruth Gordon and Sidney Blackmer), are meddlesome but seem harmless enough… until suddenly Guy takes a liking to them. Shortly afterward, mysterious and eerie things start to happen around Rosemary and Guy.

Guy lands a part in a play because the original lead goes blind rather inexplicably. Guy, afterward, suggests that he and Rosemary have a baby. On the night of the child’s conception, Minnie Castevet brings the two a chocolate mousse dessert that Rosemary says has a chalky aftertaste. She throws the rest of it out, but evidently eats just enough to get pregnant with Satan’s child! I know, that sounds super zany, but the demonic rape scene is actually pretty freaky — as is the rest of the film.

Did I mention this is directed by Roman Polanski? Yeah, that Roman Polanski. Creepily enough, the year after this movie was shot, Polanski’s pregnant wife, Sharon Tate, was famously stabbed to death by the Manson family. The movie really becomes all the more potent if you go into it knowing that morbid little tidbit.

The whole film is shot in a dark, brooding way that will make your skin crawl from the disturbing yet subtle horror used. The movie builds to a climax that leaves your heart creeping with dread in your chest at what you already know will be the outcome.

For an added treat, check out the cover of the Rosemary’s Baby theme song by Fantomas… you know, one of Mike Patton’s groups besides Faith No More. It will, if nothing else, put you into the Halloween spirit.