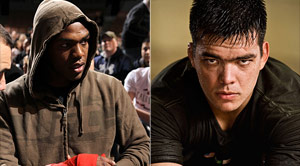 UFC’s return to Toronto will also feature a rematch between former UFC heavyweight champions Frank Mir and “Minotauro” Nogueira, as well as a highly anticipated light heavyweight collision between former champion Tito Ortiz and “Lil Nog,” Rogerio Nogueira. Plus, Ontario’s own Mark “The Machine” Hominick takes on “The Korean Zombie,” Chan Sung Jung, in featherweight action, while British Columbia’s Rory MacDonald looks to continue his ascent up the welterweight ranks when he meets Brian Ebersole.

Jones, Machida, UFC President Dana White, and Director of Canadian Operations Tom Wright will be in Toronto TOMORROW, October 12th, to discuss the event at a press conference to be held at the Air Canada Centre at 50 Bay Street at 1 p.m. ET (Gate 6 entrance off Bremner Blvd). Media wishing to attend are asked to RSVP by emailing UFC Public Relations Director Steve Keogh (skeogh@ufc.com). The presser will be open to the public and streamed live at UFC.com. Additionally, the fighters will hold an autograph session from 5 p.m. to 6 p.m. at Real Sports Apparel, located within Maple Leaf Square at 15 York Street.

“After his performance against Rampage, there’s no doubt that Jon Jones is one of the top pound-for-pound fighters in the sport,” UFC President Dana White said. “He’s already beaten Shogun and Rampage this year and now he gets Machida, a former champion. Machida is one of the most elusive and dangerous strikers in the UFC and he’s motivated to get the belt back. We’re giving the fans in Toronto a really great title fight.”

UFC Fight Club members will have the opportunity to purchase tickets to this event Thursday, October 13th, at 10 a.m. ET via the website www.ufcfightclub.com. A special Internet ticket pre-sale will be available to UFC newsletter subscribers Friday, October 14th, starting at 10 a.m. ET. To access this pre-sale, users must register for the UFC newsletter through www.UFC.com.

After capturing the UFC light heavyweight crown by stopping Mauricio “Shogun” Rua in March, Jon Jones (fighting out of Endicott, N.Y.) made his first title defense at UFC 135 in Denver by dominating Rampage Jackson to improve to 14-1. The 24-year-old also owns wins over the likes of Stephan Bonnar, Vladimir Matyushenko, and Ryan Bader, but knows Machida brings another dimension that he has never faced in the Octagon — one he must prepare intensely for.

“I am thrilled to be fighting Lyoto Machida at UFC 140 in Toronto, which is just a few hours from my hometown, Endicott, NY,” Jones said. “He is an incredibly skilled fighter and one who poses numerous challenges inside the Octagon. He has only been defeated twice in his career and is coming off a big victory in April. For me, it will be important to just continue to focus on making myself better as a fighter, and keeping the fight at my intensity and aggression levels. It is my goal to become the first UFC fighter to defeat three former champions in one year.”

With his unique and unorthodox style, Lyoto “The Dragon” Machida (fighting out of Belem, Brazil) is one of the most dynamic and technical fighters in mixed martial arts today. The 33-year-old former lightweight champion has defeated the likes of Randy Couture, BJ Penn, Rich Franklin, and Stephan Bonnar and looks to end Jones’ reign as 205-pound champion.

In a long-awaited rematch, Frank Mir (fighting out of Las Vegas, Nevada) faces “Minotauro” Nogueira (fighting out of Rio de Janeiro, Brazil) in a clash of former heavyweight champions. The 32-year-old Mir (15-5) returns to the Octagon® following a unanimous decision victory over Roy Nelson in May. He’ll look to stretch his win streak to three straight when he meets the Brazilian legend. The 35-year-old Nogueira (33-6-1, 1 NC) is coming off a highlight reel knockout of Brendan Schaub in August and looks to avenge his 2008 loss to Mir when the two meet again in Toronto.

Meanwhile, Nogueira’s brother Rogerio (also fighting out of Rio de Janeiro, Brazil) faces off against a candidate for comeback fighter of 2011, Tito Ortiz (fighting out of Huntington Beach, Calif.). “Lil Nog” and the “Huntington Beach Bad Boy” were originally set to meet in the main event of UFC Fight Night in March, but an injury sidelined Ortiz, and Phil Davis fought in his place. Since that time, the 36-year-old Ortiz (17-9-1) has had a resurgence in his storied career, scoring a submission win over Ryan Bader in July and battling with Rashad Evans on short notice in August. Now he meets Rogerio (19-5), a powerful boxer and grappler who owns wins over Alistair Overeem, Dan Henderson, and Luiz Cane.

Ontario native Mark “The Machine” Hominick (fighting out of Thamesford, Ontario, Canada) returns to Toronto — site of his valiant battle with featherweight champion Jose Aldo — to face sensational UFC contender “The Korean Zombie” Chan Sung Jung (fighting out of Po-Hang, South Korea). The 29-year-old Canadian striker looks to return to his winning ways, having won five of his last six. He now faces Jung, who became the first fighter to pull off the “twister” submission in the UFC to defeat rival Leonard Garcia at UFC Fight Night in March.

Two fighters fresh off wins at UFC 133 in August will now battle each other to see who comes out on top in the jam-packed welterweight division as highly regarded phenom Rory “Ares” MacDonald (fighting out of Kelowna, British Columbia, Canada) meets the always entertaining and unorthodox Brian Ebersole (fighting out of Melbourne, Australia). The third youngest fighter in the UFC at 22 (behind Michael McDonald and Charles Oliveira), MacDonald (12-1) has impressed with wins over Mike Guymon, Nate Diaz, and Mike Pyle en route to becoming one of the organization’s hottest contenders. His opponent, “Bad Boy” Ebersole (48-14-1, 1 NC), made quick work of Dennis Hallman in Philadelphia and dispatched of veteran Chris Lytle in Sydney to move to 2-0 in his UFC career.