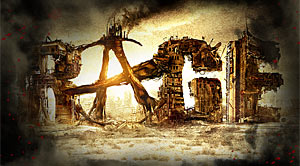 The worst crime a hotly awaited game can commit is to be ordinary. Not awful. Not even excellent. To be unremarkable is the worst offense. RAGE is here at last. One of the year’s most eagerly anticipated titles is finally on store shelves. While the game is easily capable of standing on its own merits, it’s undeniable that RAGE was assembled from parts of other, sometimes even better, games.

If you take the time to peruse RAGE’s family tree, you’ll find branches from three particular titles: Borderlands, Fallout, and Bioshock. RAGE borrows and sometimes outright steals elements from all three games to the point of lacking any originality to call its own. The end result is certainly pleasing to the eye, well-crafted and enjoyable while it lasts, but no reviewer should ignore the obvious similarities to other games. RAGE is a mixture of Borderlands’ driving and obsessive loot collecting, its post-apocalyptic setting is a picture-perfect replica of Fallout 3’s, and the weapon upgrading and ammo swapping mechanic is a clear nod toward Bioshock.

Thus, the question facing players is: Can RAGE stand on its own two feet and be judged solely on its own strengths? Or will the shadow of other games send it scurrying into a deep, dark hole, hiding its face in shame? While the following review may seem negative, keep in mind that I enjoyed my time with RAGE. However, if I had to recommend a game in the post-apocalyptic shooter genre, RAGE would never be my first pick. Games do not exist in vacuums and must be judged against their peers. While I like RAGE, I simply cannot deny that it is a Frankenstein’s monster assembled from the parts of stronger games.

This is Yell! Magazine’s review of RAGE, available for PC, PlayStation 3, and Xbox 360. For review purposes, the PC version was used, along with DNA testing to determine whether or not Borderlands is indeed this baby’s father.

Congratulations! It’s a… it’s the deformed guy from Goonies, apparently.

Rather than boring you with a prolonged opening sequence filled with story bits, RAGE wastes no time in getting you into the game. A mere 60 seconds after firs starting Rage, you, the lone survivor of an ark, emerge into the desolated wastelands of the near future in a scene entirely too reminiscent of Fallout 3’s vault dweller’s exit from the Vault. I half expected to find a discarded Pip-Boy on the ground.

Mere moments later, you’re dealt a vicious manhandling from a bunch of roving bandits. Luckily, you’re saved by Dan Hagar, soothingly voiced by John Goodman, who gently shoos away the evildoers with a generous amount of automatic fire into their higher brain functions. Of course, this being a video game, Hagar is going to want something in return for his good deed. In fact, every single person you encounter in RAGE has some type of Fetch Quest™ waiting for you. At this point in my gaming career I’m so completely past the point of caring about the insanity of NPCs asking perfect strangers to carry out their inane requests, but Rage does take things a bit far. Minutes after emerging from your hidey hole Dan fills your hands with cold steel and asks you to infiltrate a heavily fortified bandit base and murder a baker’s dozen of their members. Dude, I just woke up! Let me get some coffee in me before I get my murder on, will ya!?

Now see, if I had some caffeine in me, this never would have happened…

In any case, the game then proceeds along familiar pseudo-RPG lines by sending you on a variety of assignments, some of which will net you cash, others better gear or a combination of both. RAGE apes Borderlands’ quest model something fierce here. You could literally copy the quest giver monologues from Borderlands and paste them into RAGE with no noticeable difference. Kill bandit leader A, wipe out bad guy camp B, fetch vehicle part C and so on and so forth.

The game’s overall tale isn’t very interesting. RAGE suffers from a lack of a Big Bad. Yes, there’s the ephemeral Authority to defeat but fighting an idea is always less interesting than fighting an actual opponent with thoughts, goals, and witty bad guy dialog. Writing clever stories has never been ID’s strong suit. They excel at atmosphere and mood rather than immersive storytelling and all the flaws inherent to that business model as present in RAGE. It’s a shame since great characters and writing would have made the long breaks between gunfights more tolerable.