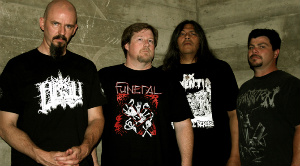 Yes, it’s true. Autopsy, death metal icons, will enter Fantasy Studios (Berkeley, California) to record new tracks. Tracks? Just tracks? Is there something more epic on the way than just another EP? If a 21-track collection of all of Autopsy’s rerecorded EPs plus new material isn’t epic in the sense of Mount Doom, what is?

The project is called All Tomorrow’s Funerals and it should be out in March 2012 on Peaceville Records.

Formed in San Francisco back in 1987, Autopsy broke ground (digging graves of course) with a new sound — one with elements of punk, thrash, metal, and demonic growls — and what became known as Death Metal. In so doing, they influenced many followers, including: Entombed, Dismember, Gorefest, Immolation, Cannibal Corpse, and Deicide. After their formation, Autopsy delivered four albums on Peacville Records. In 1995, the band was read its last rites, while members went on to form Abscess.

In 2010, however, Autopsy was resurrected with the release of The Tomb Within; it was a critical and fan darling. And following up that approval, they released the full-length Macabre Eternal.

Here’s an excerpt of the press release:

…Autopsy is gearing up to enter Fantasy Studios in Berkeley, CA later this month to record a few new tracks for an upcoming collection entitled All Tomorrow’s Funerals. The monstrous, 21-track release will contain remastered versions of all of Autopsy’s EPs — everything from Retribution For The Dead to the now sold-out The Tomb Within — as well as the new cuts.

All Tomorrow’s Funerals will be presented on CD and vinyl with all original artworks, liner notes from the band, and a killer new cover from Matt Cavotta.

“This is something the band has wanted to do for a long time, having all these chunks of material in one cohesive release, with the best sound and packaging possible,” commented the band. “Autopsy will make every effort to make sure this death metal assault is top quality and worthy of your attention.”