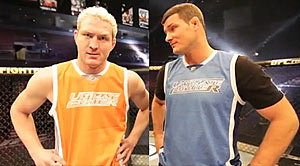 The UFC returns to the Pearl at the Palms Casino Resort on Saturday, Dec. 3 just in time for Michael “The Count” Bisping and Jason “Mayhem” Miller to settle a feud that has been spilling over for months. The middleweights, who traded verbal barbs for months as coaches on season 14 of The Ultimate Fighter, will meet in a long-awaited five-round main event in Las Vegas. Plus, the first-ever bantamweight and featherweight winners of The Ultimate Fighter will be crowned.

“Bisping and ‘Mayhem’ spent the last few months as TUF coaches and they really got on each other’s nerves,” UFC President Dana White said. “On Dec. 3, the talking finally ends and these two will go at it inside the Octagon. There’s a lot at stake in this fight. Not only do they get to settle their feud, but they get to prove that they belong in the mix to fight Anderson Silva.”

UFC Fight Club members will have the opportunity to purchase tickets to this event on Wednesday, Oct. 5 at 10 a.m. PT via the website ufcfightclub.com. A special Internet ticket pre-sale will be available to UFC newsletter subscribers on Thursday, Oct. 6 starting at 10 a.m. PT. To access this presale, users must register for the UFC newsletter through ufc.com.

Winner of season 3 of The Ultimate Fighter, Michael “The Count” Bisping (fighting out of Manchester, England) is one of the most successful products of the longest running sports reality show on television. Riding consecutive wins over Dan Miller, Yoshihiro Akiyama and Jorge Rivera, the 32-year-old now has his sights set on dominating his opponent on Dec. 3. Knowing a win puts him in contention for a title shot, the motivated Brit Bisping (22-3) seeks his fourth straight against a foe who has pushed his buttons for the last time.

“Jason is one of those guys that you either love him or you hate him,” Bisping said. “I definitely don’t like him. I think most people around him find him very, very annoying. I know people on The Ultimate Fighter did and I was no different. On Dec. 3, I’m going to kick his ass.”

A charismatic performer in and out of the Octagon, Jason “Mayhem” Miller (fighting out of Los Angeles, Calif.) returns to the UFC on a two-fight winning streak. The 30-year-old’s next task is besting Bisping, and after months of trading verbal jabs on TUF, he’d like nothing more than to shut him up when the two collide at the Palms.

“I definitely got under his skin during the season,” Miller, who owns a record of 34-8 with one no contest, said. “We hate each other’s guts at this point and on Dec. 3, we’re going to get in the cage across from each other and settle it. I’m excited for this fight.”