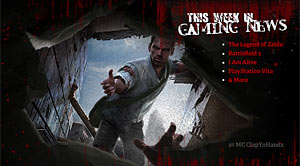 Here’s the top gaming news for the week of September 26th, 2011 brought to you by Yell! Magazine

Despite Blizzards best intentions to release Diablo III this holiday season, alas it shall not be. Blizzard announced this week that Diablo III should be released early next year. That’s still not a concrete release date, and I won’t be surprised if it gets pushed back even more. On the bright side, the beta is out, and they can’t be in beta forever….or can they? Forget I said that.

Just in time for the holidays, L.A. Noire: Complete Edition, and the PC version of the game will be coming out this November. For those who haven’t played through the the crime drama, you will also be treated to all of the previously released DLC for the game. So if you missed it the first time around, or if you know a friend hasn’t played it, it makes a great gift. L.A. Noire: Complete Edition will be out on November 8 for PC, and November 11 for everything else. The only thing better than Zelda, is a free Zelda game. The celebrate the 25th anniversary of the series, you can now download The Legend of Zelda: Four Swords Anniversary Edition for free on the 3DS eShop, or the DSiWare store. It will be available from now until February for free, and the local multiplayer is cross compatible between 3DS and DSi users. The included single player is fine, but hopefully you can find someone to play this with. The Battlefield 3 beta is out now. Go download it on the PS3 or Xbox 360. By the time you read this, a PC version of the Beta should be up too. Ubisoft announced I Am Alive way back in 2008. Development on this game was restarted and reworked, and it was rumored to be canceled on several occasions. The reins were ultimately given to Ubisoft Shanghai to finish. The apocalyptic disaster game finally looks like it’s gonna see the light of day. Ubisoft announced that they expect the game to released this Winter. That could mean, this holiday season, or early next year. Hopefully this game won’t just be “2012: The Game”. It will be up for download on the PlayStation Network and Xbox Live Arcade, which is weird because I can swear that they wanted to make this a full retail release. It looks like Mortal Kombat will finally get that new movie people have been waiting for. The last movie, Mortal Kombat: Annihilation, came out way back in 1997. Director Kevin Tancharoen, the guy behind the Youtube series, Mortal Kombat: Legacy, will get a shot at making a feature film based on the fighting franchise. Warner Bros.’ New Line Cinema will produce the film with an estimated budget of $100 million. The movie should be released sometime in 2013.