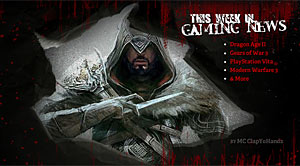 Here’s the top gaming news for the week of September 19th, 2011 brought to you by Yell! Magazine

Konami continues to rerelease all their old games with a high def coating, with the Metal Gear Solid HD Collection. The North American edition of the box set will include Metal Gear 2: Sons of Liberty, Metal Gear Solid 3: Snake Eater: Subsistence (which includes Metal Gear, and Metal Gear 2), and Metal Gear Solid: Peace Walker. That’s a lot of Metal Gear. The controls will be roughly the same, and it will look prettier on your HDTV. Assuming there’s Trophy support, I’d be totally willing to replay these games.

The new Dragon Age II DLC, Mark of the Assassin, will be released on October 11. It will feature the voice and likeness of Felicia Day, star of the online series The Guild. I’m not a big fan of Felicia Day, or The Guild. She was in an episode of House once. I liked her in that.

Microsoft’s simulation racing game, Forza 4, will be compatible with their new wireless motion-controlled racing wheel. In addition to the previously announced Kinect support for the game, how much more optional add-ons can they jam into this game. Believe it or not, I’m excited for this. I have the old bulky Microsoft racing wheel with the peddles, and I never use it because it was so unwieldily. I know motion controls can be hit or miss, but I’m willing to give this a shot because I like the feel of holding a wheel. Forza 4 will be out on October 11, and a demo will be out on October 3, so expect the new racing wheel at around the same time.

In other Forza News, when the game is released you can get, like most games these days, a season pass to all or most of the upcoming DLC. However, this season pass will be $30, rather than the usual $10. Why? Because it gets you access to 6 car packs. That’s 60 cars between the games release and April of next year. Is it worth the price? You do save $13 by buying the pass, but does anyone really buy all the cars. What if one pack is just Fiat’s, and you happen to hate Fiat’s. This really is only for the serious car nuts.

It was confirmed this week that the PlayStation Vita will be region-free. This means you can import Japanese games and play them on your North American bought Vita. Or vice-versa, because this also means you can import a Vita from Japan when it launches there at the end of this year, and play North American releases when they get her a few months after. So if you don’t mind spending the extra cash, you can get a Vita months before all your friends. I’m very tempted to do just that. The PlayStation Vita will be released in Japan on December 17, so get your orders in now.

Remember a couple week ago how I was speculating the possible Prestige Edition goodies for the next Modern Warfare. Well unfortunately it looks like none of that will happen. Infinity Ward’s Community Manager, Robert Bowling announced this week on Twitter that there will be no Prestige Edition of Call of Duty: Modern Warfare 3. Instead there will only be a standalone version of the game, and a $99 Hardened Edition which will include a steel bookcase, a 100 page field journal, and a year of their Elite membership service that gives you access to upcoming map packs, and other perks. I for one am a little disappointed. But I admit, the last thing I need is more useless gaming memorabilia. Call of Duty: Modern Warfare 3 will be out on November 8.

Those who decide to buy Assassin’s Creed: Revelations on the PS3 will get a little bonus. Packed in with every PS3 version of the game is a FREE copy of the original Assassin’s Creed directly on the disc. If you’ve never played the original, this is a perfect way to get acquainted with the games fiction, and see where it all began. It’s a great idea on the part of Ubisoft. I guess they had extra room on that Blu-ray and it costs them nothing to put it on there, so why not. Assassin’s Creed: Revelations will be out on November 15.

The Diablo III beta is available for DOWNLOAD NOW. If you signed up for the beta you might be one of the lucky chosen for this opportunity. Go to Battle.net, and look under your account info to see if you’re eligible. The download is 2.7GB, but require at least 14GB of free space, and you can get it for PC or Mac. In the beta, you only get to play a portion of Act I, and tryout the five character classes. You can create and level up the Barbarian, Witch Doctor, Wizard, Monk, or Demon Hunter up to level 13. Hopefully a more open beta will be released soon. There’s still no concrete release date for the Diablo III, but Blizzard is still hoping to get it out there before the end of this year.