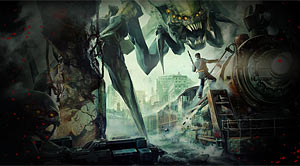 Summer is officially over and gamers are happily indulging in a glut of high-profile releases. The past weeks have seen players hack and stealth their way through Deus Ex: Human Revolution’s campaign, slay shambling hordes of undead vacationers in Dead Island and step into the heavily armored boots of the titular character in Warhammer 40,000: Space Marine. It’s a good time to be a gamer and the wave of excellent releases shows no sign of abating. Case in point, today’s topic: Resistance 3, one of the most eagerly anticipated titles of the season. And coming up soon: Gears Of War 3! Excuse me while I wipe the drool from my chin… and wash off the remains of a hefty plate of Cheetos. Gamer food.

The original Resistance: Fall Of Man is a fondly remembered PS3 launch title, a best-seller that was an early showcase for the graphical and audio prowess of the then-new console on the block. While its sequel, 2008’s Resistance 2, was equally popular sales-wise, critics rightly pointed out that its main campaign was of the more-of-the-same variety and generally felt like a title rushed out of the door to satiate fans of the first game. Luckily, Resistance 3 benefits greatly from a longer development cycle, stronger production values and an overall more polished feel than Resistance 2.

This is Yell! Magazine’s review of Resistance 3, available exclusively on PlayStation 3. Accordingly, the PS3 version was used for review purposes, along with four bags of Cheetos, a Diet Pepsi, prayer beads, and some incense. Now let’s get this review started before the angels come to help me ascend to a higher plane of enlightenment.

My Chakras are so totally pulsating right now.

Following the concluding moments of Resistance 2, which saw series hero Nathan Hale killed by a point-blank shot to the head by supporting character Joseph Capelli, Resistance 3 picks up with the disheveled former soldier trying to eke out an existence amidst the ongoing Human/Chimera conflict. Capelli is quickly moved from the supporting cast to the primary protagonist role, since there’s no such thing as a former soldier when aliens are busy terraforming the Earth to resemble their icy home planet.

We tried offering them Alaska but Sarah Palin scared them away.

Recurring series character Dr. Malikov shows up with an offer: escort him to New York for a last-ditch attempt to end the war. Capelli is understandably wary of leaving his wife and kid behind for what might as well be a suicide mission but, eventually, duty calls. While it is a bit of a melodramatic touch, Capelli hangs on to his son’s mitten for the rest of the game, serving as an emotional reminder of everything he’s fighting for. One touching separation scene later, the pair set off to save the world from the parasitic Chimera.

While earlier games in this franchise featured horror elements, Resistance 3 really kicks it up a notch. Resistance 3 straddles the fine line between action and horror game, finally settling in the later category by mid-story. There’s a palpable sense of impending doom throughout, reflected in the Chimera’s relentlessly horrific treatment of their human opponents. Jump scares frighten the crap out the player at every turn, the Chimera appear in increasingly decrepit and unnatural forms and every major firefight you survive feels like a major victory against impossible odds. Resistance 3’s tone is a triumph, always letting you know that you are playing as the underdog in this conflict.

Read about the Resistance 3 gameplay, presentation, and verdict on the next jump.