Jimmy Kimmel Live! – Spiderman vs. Frankenstein, Or: I Mean Jones vs. Rampage [VIDEO] 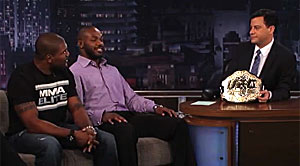 With only four days away from UFC 135: Jones vs. Rampage which will also mark the first title defense for Light Heavyweight Champion Jones (13-1) in the UFC. Oddly, they both appeared on Jimmy Kimmel Live! last night in a fairly calm state I would say. Rampage played the game as the bully (his usual standards before a fight), and Jones kept it loose making a funny statement when Jimmy asked them “What’s the difference in your styles as far as fighting goes?”. Jones responded “It would be like Spiderman vs. Frankenstein, something like that pretty much”. As expected on a show like this the entire segment is part funny, and cheesy with poor Dr. Phil in between the so called tension.

Unfortunately the video is split up into two parts, which isn’t the end of the world, and trust me it’s worth the watch. Since UFC 135 is coming up this Saturday (Sept. 24, 2011), it’s time for your predictions.

Let us know who you think will win the fight between Jones vs. Rampage in the comment section below.