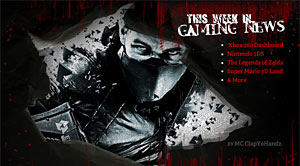 Here’s the top gaming news for the week of September 12th, 2011 brought to you by Yell! Magazine

We got lots of news coming out of The Tokyo Game Show this week. Final Fantasy XIII-2 now has a North American release date. Expect more Snow and Lighting on January 31st. But I’m willing to bet that the date will be pushed back.

Syndicate, the early 90s sci-fi isometric real-time tactical shooter, is getting remade into, you guessed it, a sci-fi first-person shooter. Published by EA, and being developed by Starbreeze, the studio that brought us the excellent Chronicles of Riddick series. Get ready for futuristic weapons, sci-fi intrigue, and they are boasting 4 player online co-op play.

The new Xbox 360 Dashboard will be getting a Kinect fueled overhaul this holiday. Soon you’ll be able to use the motion sensing camera to browse and launch games, videos, and applications on your Xbox. But don’t worry, you’ll still be able to sit down with a controller, and do all the same things you’ve gotten accustom to. The interface itself will be redesigned to look more like Microsofts upcoming Windows 8 operating system. The addition of voice activated Bing Search is suppose to ease the content browsing experience. Facebook, Netflix, and Youtube will get deeper integration. It will be even easier to annoy all your Facebook friends with what you’ve been playing. Expect this Dashboard Update before the end of the year.

In other system update news, The Nintendo 3DS will add 3D video capture support in a November update. Now its never been easier to make your very own bad Avatar fan film. Questionable homemade 3D movies aside, you’ll also get a slew of new StreetPass challenges to do, or more likely, not do to your hearts content. Then again, sales of the 3DS has shot up 260% after the price drop last month. So you might actually see more 3D movie making machines on the bus on your way to work or school. Have fun people, and keep it clean. These are family friendly handhelds.

After the rerelease of The Legend of Zelda: The Ocarina of Time on the 3DS, The Zelda 25th anniversary train continues with a downloadable gift from Nintendo. Starting on September 28th, you’ll be able to download a free copy of The Legends of Zelda: Four Swords Adventure. This game originally came out on the Gamecube in 2004, but now it sports a new single player campaign, and wireless multiplayer. It’s a hell of package. Nintendo doing their best to make up for the horrible 3DS launch, and nothing says I’m sorry like an awesome free game.

The two big 3DS titles this year finally have a release date. Super Mario 3D Land will be out on November 13th, and Mario Kart 7 will arrive on December 4th. To emphasize the 3D, Mario Kart will include a first-person driving mode utilizing the systems built in gyro sensor for steering. Not to be outdone, Super Mario 3D Land will also use the gyro, and include some kind of StreetPass functionality. These games will be using all the system’s bells and whistles. My 3DS has been collecting dust for months now. I can’t wait to collect stars, and chuck blue shells at motorists later this holiday season.

It looks like that 3DS Slide Pad attachment will be more needed then once thought. Much to my chagrin, the bulky add-on will add the aforementioned second analogue stick, and a set of shoulder buttons to the system, all powered by a single AAA battery. At first, the only game announced for this carpal tunnel making monstrosity was Monster Hunter Tri 3G. I could care less about anything Monster Hunter, so no big loss. But now they’ve revealed that upcoming games like Resident Evil: Revelations, and Metal Gear Solid: Snake Eater 3D will also use the extra peripheral. Other games slated to use the device are Ace Combat 3D, Dynasty Warriors Versus, and Kingdom Hearts 3D Dream Drop Distance. With that kind of line up, it looks like my portable will get a little less portable. There’s still no North American release date, but expect to pay $20 when it hits shelves.

Why make a new game when you can just put a fresh coat of paint on an old one and call it an upgrade. There’s a slew of new High Definition rereleases coming up. Metal Gear Solid, Zone of the Enders, and Oddworld: Stranger’s Wrath are getting an HD makeover. Final Fantasy X is also getting an HD Remix for both the PlayStation 3 and the PlayStation Vita.

Speaking of the Vita, Sony stated that most of the games you’ve already downloaded for the current PSP will be compatible with the new system. Some might also take advantage of the extra analogue stick on the Vita. There’s even good news for those with a UMD collection. Sony is working on a way to get those working on the new system as well. It looks like they are really trying to cover all their bases on this one. Smart move Sony.

I’ve been looking for a reason to get a PlayStation Move setup, and this could be it. The remake to the N64 classic, GoldenEye 007: Reloaded is getting a Double “0” Edition. It comes with a Move controller, a navigation controller, a PlayStation Eye camera and Sharp Shooter to put it all in. The bundle is due on November 1st. Previous Move bundles didn’t have games I wanted to play with the Move, but GoldenEye seems like a perfect fit. Hardcore, yet casual enough to play with the Move. This might be the first Move shooter worth playing. We’ll let you know here at Yell! Magazine.