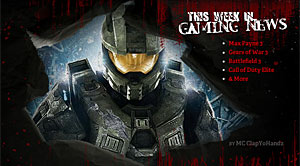 Here’s the top gaming news for the week of September 5th, 2011 brought to you by Yell! Magazine

From the people who brought us Matrix style bullet time in a video game, comes Max Payne 3. In a press release by Rockstar Games founder Sam Houser:

“We’re excited to show fans a modern version of Max that pulls them back into his dark and twisted story.”

It’s been almost 8 years since the last Max Payne, and somehow you end up in Brazil as a private security contractor. Max Payne 3 will be released in March 2012. We’ll keep you posted on more Max Payne news here at Yell! Magazine.

Nintendo confirmed a Circle Pad attachment for the 3DS. This would allow dual analogue controls for the handheld. To make matters more bulky and complicated, it will also add a couple of shoulder buttons as well. The additions seems like an afterthought, and the only game that might use it is the Japanese phenomenon that is Monster Hunter. I think 95% of people won’t need this extra nub. This story just makes Nintendo look shortsighted.

When games come with a bonus soundtrack CD it’s usually something I never open because I get tired of the music just by playing the game. However, the soundtrack that comes with the collector’s edition of Batman: Arkham City is actually something I’d want to listen to more than once.
Here’s the track list to judge for yourself:

1. Panic! At The Disco – Mercenary

10. The Boxer Rebellion – Losing You

12. A Place to Bury Strangers – In The Shadow

In other Arkham City news, the leaked achievement list confirms New Game Plus mode. Allowing players to go through the game again with all the toys they’ve unlocked. Batman: Arkham City will be out on October 18th.

In other video game soundtrack news, you’ll be able to buy the Gears of War 3 soundtrack day-in-day with the game. You can find it on iTunes, Amazon, or from SumthingDigital.com. Gears of War 3 and its soundtrack will be available on September 20th.

The ESRB, the video games rating board recently rated the old trio of Devil May Cry games. It is safe to assume that the first three games in the Devil May Cry series are up for an HD rereleased. I’ve never been a big fan of the games, but I’d be willing to give them another go, especially if that means easy achievements.

In quick news, soon you might be able to buy and trade-in your Apple devices at Gamestop. In Steam you can now trade your Team Fortress 2 hats for Portal 2, or Sega’s Spiral Knights stuff. And the MMO Star Trek Online just became free to play.

“The Halo I wanted to build was fundamentally different and I don’t think I had built enough credibility to see such a crazy endeavor through.”

However, he believes that the team is making the best game they can. But just not the game he wants. It really sounds like everyone involved is trying to put a positive spin on this. What he’s basically saying is, we’re gonna get a great Halo game, it might be more of the same, but it’ll be good. Do any of us really want a drastically different Halo game? I for one wasn’t a fan of the real time strategy Halo Wars. So just give me some grunts to shoot at and a holographic blue lady.

A shot of a Japanese Battlefield 3 promo poster revealed that the Xbox 360 version of the game will come on two discs. There are many ways they can separate the content. They can have one disc just be an install disc, like they did with Forza 3. Or they can have one disc be single player content, and the other be multiplayer content. Either option isn’t ideal, especially if you lack the hard drive space. The Blu-ray PS3 version sounds more convenient. Then again you might miss out on some exclusive Xbox 360 only content. It’s gonna be a tough choice. We’ll help you make it when the game is released on October 25th.

Call of Duty: Modern Warfare 3 will launch with the Call of Duty Elite service. It’s a social network for COD fans. For a yearly fee, players of Black Ops and MW3 will be able to group up and show off all their achievements. Check out the video for all the details.

The Missing Link, Deus Ex: Human Revolution’s first downloadable content will be released in October. Be ready for new people to interact with, new environments, and the ability to change all your body augmentations.