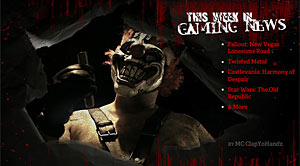 Here’s the top gaming news for the week of August 22, 2011, brought to you by Yell! Magazine

If you want to play the new Star Wars MMO at launch this holiday, you better pre-order soon and activate your copy the second you can, because, believe it or not, space will be limited. EA made it known this week that they will cap the amount of players at launch in order to ensure a smooth gaming experience. In order to control the server population at launch, they will limit the amount of retail copies available at stores, and will turn off the ability to download a digital copy as well. More copies will be available once EA adds more servers to accommodate more people. Let me say, I love Star Wars, and this MMO is suppose to be a fans dream, but EA might be counting their chickens before they hatch.

In other Star Wars news, the release of Star Wars Kinect has been postponed indefinitely. The Kinect title was scheduled for release this holiday, but reports indicate that it was far from ready, and can use some more time to be fleshed out. Unfortunately, this also means that the cool R2D2/C3PO-themed Xbox 360 won’t be coming out anytime soon.

But if you need a new Xbox, now is probably the best time to buy. Retailers in Canada are getting a great new Xbox 360 bundle. For the standard $299 price tag, you now get a 250GB Xbox 360 S, and five full games. The games included are Halo 3, Halo Wars, Alan Wake, Gears of War 2, and Fable 3. These games come as packed in download codes. You don’t get a physical box, but having five full games directly on the hard drive of your shiny new Xbox sounds great.

For those who bought a Nintendo 3DS before the August 11th cutoff date, and either updated the system, or logged into the Nintendo eShop, you are eligible for 20 free NES and Game Boy Advance downloadable games. To check your eligibility, get your 3DS serial number ready, and go to Nintendo’s Ambassador Confirmation site. If you get a thumbs up, you can get 10 free NES Virtual Console games in the eShop on September 1st. Then, later this year you are also entitled to 10 more GBA games. Sure, we paid a lot for our 3-D handhelds, but nothing says I’m sorry like free games.

Last year’s critically underwhelming Xbox Live Arcade game, Castlevania: Harmony of Despair, will be released on PSN this September. I admit the single player left much to be desired, but I enjoyed the multiplayer. New to this version is the local four player co-op, in addition to the six player online co-op. As a bonus, you also get all the downloadable content already released for the Xbox.

Finally, a proper 3-D/2-D Kirby game on a console is finally coming out! I know a pink puff ball doesn’t exactly scream metal, but for any old-school gamer, this is a game you’ve been waiting for. Kirby’s Return to Dream Land will be out on October 24th.

This is somewhat gaming news, but it’s definitely worth a mention. The new iPhone 5 is slated to be released this October. Something else you can play Angry Birds on.

God of War creator David Jaffe announced that Twisted Metal will be released on Valentines Day, February 14th, 2012. Why not spend that special day with your significant other smashing cars in a psychotic clown-face-shaped ice-cream truck.

Be sure to check back next Friday for more of the latest gaming news at Yell! Magazine.