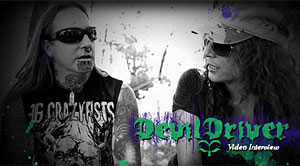 DevilDriver. Hard, fast, loud, and intense. If there was a roof at Heavy MTL, these guys would have blown it off. They have a great stage presence and sound as good live as they do on record, if not better. And I have rarely seen a band get a circle pit moving as ferociously as they do.

I know that there’s only so many slots available for one of the two big stages, but I have no idea why a band such as DevilDriver was relegated to the small stage that you had to walk 10 minutes to get to. That’s like Avatar being a straight-to-video release, not that I’m endorsing the movie as something to behold, but there was/is no other way to see it than on the big screen and in 3-D.

We were fortunate enough to interview DevilDriver’s Dez Fafara and Mike Spreitzer a few hours prior to their performance. Now, Dez is a pretty intimidating looking guy, but a tight-lipped asshole he is not. He opened right up and Mike was as friendly as can be, despite both of them going through a year of being pissed off (they explain this as a part of their writing process for Beast in our interview).

They also reveal that DevilDriver is in the process of writing their next album.

DevilDriver – Not Making the Cut

Not making the cut on our interview is Dez going off about the Golden Gods award show. Well, he didn’t really go off, but he did express his disappointment of DevilDriver having played the show and not making it to the final cut. To go back to an earlier point: How is a band big enough to be invited to play the Golden Gods and yet be assigned the small stage at a metal fest?

Again, that’s enough from me. Enjoy our exclusive video interview, and as always…