UFC – Fedor vs. Couture: Will It Finally Happen? 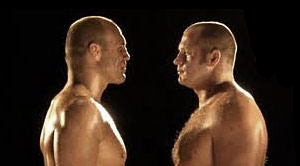 Now that Fedor Emelianenko has been cut from the STRIKEFORCE roster because of three consecutive losses and Randy Couture has retired from active fighting in the UFC after the loss to Lyoto Machida, it seems a great time for this fight to occur. Both fighters, considered by most as two of the best heavyweights ever to step into a MMA ring, have never fought each other and it’s high time they finally do.

There has always been speculation when Couture was kicking it out in the UFC and Fedor doing the same in Pride on who the better heavyweight was. Failure to bring this fight to fruition in the past can be directly laid at the feet of Dana White and his unwillingness to sign Fedor to a UFC contract because of Fedor’s desire to be free to fight in sambo matches in his native Russia.

It’s time to convince Couture to come out of retirement for one last match, it’s time to get Fedor into the UFC, at least for one fight, and it’s time for Dana White to loosen the purse strings and strictness in contracts to make this fight happen. We’ll all be disappointed if it doesn’t.