Activision & GameStop Launch PROTOTYPE 2 “Get In The Game” Promotion 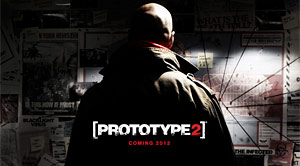 Gamers now have a chance to win their ultimate fantasy with Activision Publishing, Inc.’s (Nasdaq: ATVI) and GameStop’s (NYSE: GME), “Get in the Game,” pre-order promotion for Radical Entertainment’s highly anticipated PROTOTYPE 2.

U.S. and Canadian players, 18 and older, who pre-order PROTOTYPE 2 at GameStop between now and Sept. 1, 2011 will have the opportunity to go online and enter a random drawing to win a trip for two to Radical Entertainment in Vancouver, Canada and become a character in the upcoming open-world action thriller. To enter the drawing, and for full rules and regulations, go to www.gamestop.com/collection/prototype-2. For Canadian entries, go to www.gamestop.ca/prototype-2.

“Thanks to this great partnership with Activision and GameStop, we have an incredible opportunity to offer gamers something truly unique,” said Ken Rosman, Studio Head, Radical Entertainment. “In addition to just seeing themselves in the game, the winners will actually be able to locate their virtual selves and shape-shift Sgt. James Heller into their likeness. Radical wouldn’t be where it is today without our fans, and this is just another way for us to thank them for all their support.”

The sequel to Radical Entertainment’s best-selling open-world action game of 2009, PROTOTYPE 2 takes the unsurpassed carnage of the original PROTOTYPE and continues the experience of becoming the ultimate shape-shifting weapon. As the game’s all-new infected protagonist, Sgt. James Heller, players will cut a bloody swathe through the wastelands of post-viral New York Zero (or more simply… NYZ) with unparalleled locomotion, building up a vast genetic arsenal of deadly, biological weapons and abilities as they hunt and consume their way toward the ultimate goal — to kill…Alex…Mercer!

For more information about PROTOTYPE 2, check out the newly updated official game web site at www.prototypegame.com. And for the truly dedicated, be sure and head over to www.facebook.com/PROTOTYPE and join the PROTOTYPE Army — a community of more than 250,000 (and growing) fans that receive constant updates from the team at Radical, and early sneak peeks at new information and assets.