Vampires Suck In Addition To Being For Lusty Chicks 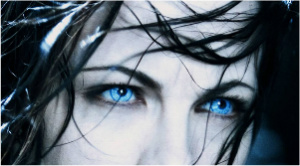 Warning: This video proves without a shadow of doubt that vampires are now officially for chicks… especially those who have never been kissed, left to wallow in a fantasy world where a kiss will solve all their problems in one gloriously rapturous moment.

Number one: If one defines “top literature” as the thing a person has read the most often in his or her life, my top piece of vampire literature is, without question, the back of a Count Chocula cereal box. General Mills, it seems, released a true classic.

4 What are your top three vampire kisses?

It’s not the sort of thing I typically commit to memory, but I promised Josie I’d take an honest stab at answering this one, so here goes.

My number three pick is Edward kissing Bella on the neck in Twilight (2008). No, no, it’s not what you think. It’s actually quite adorable. Bella, desperate for her boyfriend to turn her (i.e., give in to his lust), tilts her head and lowers her collar. Edward leans forward, rests his chin against her neck, and gives it a small peck. “We’ve got all the time in the world,” his smile says. “God, I think I just climaxed twice,” her gaze exclaims.

In the number two spot, we have Michelle Rodriguez and Kristanna Loken’s first smooch on the set of Uwe Boll’s awful, awful Bloodrayne (2005) adaptation. Hey, it was so passionate the two actresses became a couple afterwards. That’s got to count for something.

As for my number one blood-sucking locking of the lips, I’ll have to go with a sex scene from yet another terrible movie, Underworld: Evolution (2006). Strictly speaking, there’s an awful lot more going on here than just kissing, but I don’t care. Director Len Wiseman may not have the best storytelling skills, but he sure is good at filming his wife making hot, hot whoopee with another man… Huh.

5 Who’s the sexiest/favorite male vamp? (Because with vampires, aren’t sexy and favourite the same thing?)

That would have to be the Count from Sesame Street. Obsessive-compulsive disorders are such a turn on!

If sexy and favorite are indeed the same thing, we may have a problem. You see, I was hesitating between Salma Hayek’s character in From Dusk till Dawn and Kate Beckinsale’s Selene from the Underworld series, but then I remembered my last girlfriend was a total emotional vampire. I assure you, though, she is no favorite of mine.

Getting bitten by a dead person isn’t really among my fantasies, but I guess I’d have to go with Edward Cullen from them Twilight flicks, seeing as, whenever he’s onscreen, I spend an inordinate amount of time rolling my eyes and muttering, “Oh, bite me.”

From “Restless,” the Season 4 finale: “I wear the cheese. It does not wear me.”

For heaven’s sake, he’s an attempted rapist! Has no one else seen the bathroom scene in the Season 6 episode, “Seeing Red”?

There are a lot of good ones, such as the spectacular hospital bed scene in Innocent Blood (1992) and the final death (trying to avoid spoilers here) in 30 Days of Night (2007), but my favorite would have to be Paul Reubens’ interminable demise in the original Buffy the Vampire Slayer (1992) movie.

I’m inkling toward Jacob, but it was a tough call. On the one hand, here’s what I wrote about Edward in my review of New Moon (2009): “Edward strikes me as a turnip, a pasty egotist who gets his rocks off through mind games […] That’s creepy, not romantic.” On the other, how many times is Bella going to have to reject Jacob before he gets the message? He’s worse than a Québec referendum, and I imagine no more than three people got that joke. Enjoy the veal, everybody!