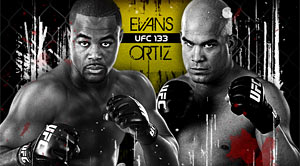 When Tito Ortiz scored that unexpected KO against Ryan Bader at UFC 132, the majority of the MMA community were forced to eat their words and Ortiz exploded back into relevancy. Now, weeks after the shock win, Ortiz will step back into the octagon with former champion Rashad Evans at UFC 133.

The spoils for the winner are great. If Rashad can follow the script and get the win, he will once again regain his number one contender status and face the winner of Jackson versus Jones. If Tito can once again overcome the odds, he will complete a phoenix-like rebirth and a Leben-like quick double that will see “The Huntington Beach Bad Boy” bounce right back in the title picture.

The two have faced off before as they first clashed away back at UFC 73. The result was a draw but a lot has changed since that first meeting. For one thing, Rashad has improved his striking and now has some of the best hands in the light heavyweight division. From being a one-dimensional wrestler who grappled his way through the Ultimate Fighter, Rashad is now a fighter recognised as being a quality boxer with some of the best footwork in MMA. Tito has gone through spinal fusion surgery to fix niggling back problems that have hindered him in a number of fights. For a wrestler to once again have full confidence in his body has been a big factor in the rejuvenation of Ortiz’s career.

A major factor in the fight will be the fact that it has been over a year since Rashad stepped into the cage. A succession of injuries and bad luck has seen Evans take an unwanted extended layoff. Evans’ last fight was away back at UFC 114 when he beat arch rival Quinton “Rampage” Jackson.

Being granted the privilege of headlining such a high profile fight after just one win in six shows how powerful Ortiz’s enduring popularity and evergreen marketability is. The peroxide blond with the big head has been a constant draw in the division but it is only now that he is being treated as a legitimate threat, rather than being used to bulk up other fighters resumes with impressive sounding victories.

The romance of this Cinderella story is the biggest pull for the fight. Fans will enjoy the drama of an old vet rediscovering the glory days of his prime against one of the top guys of the new generation. Despite how enticing the underdog story, fans will also be excited by the prospect of either Evans versus old teammate Jones or nemesis Rampage Jackson.

The fight is likely to stay standing with Ortiz being the one more desperate to take the fight down. Rashad’s speed and footwork will see him beat Ortiz to the punch and he will him dart in and out of range landing stiff jabs like he did against Rampage. Ortiz is always going to be dangerous on the feet as he showed against Bader but Evans is a much more accomplished striker.

This fight is a win-win situation for the UFC and its light heavyweight division as the winner will create shockwaves in the division as either completion of a resurrection or the confirmation of a future grudge match.