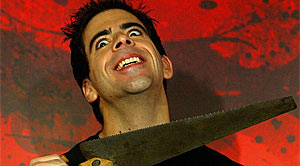 Earlier today Eli Roth announced that a new maze will open at Universal Studios Hollywood, based on his Hostel film franchise.

“Creating a maze for Halloween Horror Nights is a horror fan’s dream come true,” Roth said. “I’ve been visiting Halloween Horror Nights for years, and still remember the heart-pounding terror of going through the mazes for the first time. For me it was like going inside the world of a movie and experiencing it in a visceral environment that simply cannot be replicated, and in subsequent years I’ve found I’m just as scared as I was the first time.”

“Eli Roth’s Hostel: Hunting Season” will recreate Elite Hunting, the gruesome human headhunting business from Hostel film franchise, which is fictitiously based in Slovakia and caters to only the wealthiest and most important clientele.

The press release stated, “The maze will re-imagine the film’s dehumanizing torture chambers and send guests on a spiraling journey through the corrupt halls of Elite Hunting’s torture factory. Elite Hunting, a secret society that tortures and kills American youth for sport in exchange for large sums of money, will prowl the factory and prey on its many maze visitors.”

Roth also plans on being one of the judges in the annual Halloween Horror Nights film competition.

Last week a maze based on The Thing was announced. The Thing plans to play in both Universal Studios parks, but Hostel will be exclusive to the Hollywood park. Rejoining the fun this year will also be “Rob Zombie’s House of 1000 Corpses: In 3D Zombievision”.