Transformers: Dark Of The Moon Game Review Or: Ah, Movie Tie-In Game! We Finally Meet Again At Last For The Very First Time! 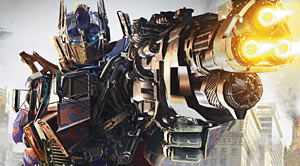 Video games based on movie licenses are the cockroaches of the industry. No matter how hard you stomp, they keep coming back for more, year after year. The summer movie season is a fertile breeding ground for these pests, as countless games are released in conjunction with their respective films. More often than not, this results in rushed schedules (required in order to meet tight deadlines) and lower-than-average production values. Movie-based games are the quickies of the gaming world, the $10 hookers. Yes, you’ll get your money’s worth, but it’s a toss-up to decide which one of you truly gets screwed.

One can’t really blame the gaming houses that create these products, they’re under terrible pressure to deliver a playable game, usually with barely six months of advance notice. It’s a minor act of god when such soul-crushing deadlines result in stellar titles, such as 2009’s X-Men Origins: Wolverine, which was a surprisingly good game. However, you’re much more likely to end up with such gag-reflex-inducing games as Iron Man, Superman Returns, some of the lower rung Lord Of The Rings games and, of course, the one that caused the video game industry crash of 1983, E.T., tens of thousands of copies of which are currently residing in a landfill somewhere.

The list goes on. From Hunt For The Red October to Enter The Matrix to Friday The 13th, movie-based games are some of the worst reviewed games year in and year out. Whenever I have to review one of these, a strong booster shot to the old stamina consisting of Ukrainian booze and horse tranquilizers is in order, just to fortify myself against the upcoming onslaught of repetitive clicking, jumping puzzles and actors delivering their lines with all the intensity of bored coma patients.

But wait, my faithful and strangely colored readers! (Oooh, pretty! Guess the horse tranquilizer is kicking in…) The subject of today’s review is Transformers: Dark Of The Moon, based on Michael Bay’s deeply theological movie concerning the woeful consequences of robot-on-robot violence.* Developed by High Moon Studios, who scored a considerable hit with last year’s similarly themed War For Cybertron, there’s hope that this game can overcome the stigma associated with the movie-based genre. Then again, there’s always the possibility that these Autobots only capable of transforming into steaming turds.

*(Warning: Actual movie may not be as thoughtful as understood by reviewers under the influence of powerful narcotics.)

This is Yell! Magazine’s review of Transformers: Dark Of The Moon, available on PlayStation 3, Xbox 360, and Nintendo Wii. For review purposes, the PS3 version was used.

AUTOBOTS! TRANSFORM AND ROLL OUT!

AND BRING ME BACK SOME MUNCHIES!!!!

While War For Cybertron had a truly entertaining plot, pertaining to the early days of the robotic civil war, no such depth is to be found here. As with any game with “Transformers” in the title, Dark Of The Moon once again finds the noble Autobots and the evil Decepticons trying to rip out each other’s ball bearings.

The game’s greatest weakness is having to work around the plot, or lack thereof, of the movie. Keep in mind that this is a flick directed by Michael Bay. Massive spoiler alert: things blow up, then more things blow up followed by a lengthy period of things going boom, then Shia LaBeouf does something annoying. The game’s story is mostly a prelude to its cinematic cousin, setting up some of the movie’s plot line. There are some unique missions created for the sake of lengthening the overall experience, but Dark Of The Moon’s story mode can easily be beaten in a single sitting, no more than five to six hours for experienced gamers, which is pretty typical playtime for a quickie movie tie-in.

Players get to inhabit the giant, metal shoes of several different fan-favorite Transformers. The game keeps things interesting by having you control a different robot during each of the main campaign’s seven chapters, with each one bringing their own various abilities to the fray. Mirage, for example, is a stealthy infiltrator and comes equipped with a sniper rifle. Big, bad Megatron can siphon health from foes. It’s nothing terribly exciting or new but at least you won’t get stuck with a character you don’t like for any extended period of time.

Since you play as both Autobots and Decepticons, the game has no sense of closure by the time the credits roll. Nobody really wins or loses, the game leaves it up to the movie to tie up any loose ends. Overall, it’s not a very satisfying tale.

Read about the gameplay, presentation and verdict on the next page…

Related Items: Dark of the MoonTransformers