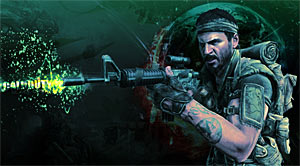 Call of Duty: Black Ops is T-minus 12 days away from launching its latest content pack on the PlayStation 3 entertainment system and Windows PC with the worldwide release of Annihilation, the third DLC for the blockbuster title from Activision and Treyarch.

Call of Duty: Black Ops has shattered sales records and drawn millions of gamers online since its November 2010 launch, with Black Ops fans logging billions of gameplay hours to date. Annihilation features four new multiplayer maps comprised of a Cuban cliff-side golf course, a 1960s American Drive-In theater and much more. Additionally, the fan-favorite Zombies are back in the mythical paradise of Shangri-La, overrun with a new species of zombie and innovative gameplay surprises around every corner.

“With Annihilation, the team at Treyarch and Activision has shown its continued commitment to bringing new and unique content to our fans,” said Treyarch Studio Head, Mark Lamia. “Players are getting four of the best multiplayer maps to date with Hangar 18, Drive-In, Silo and Hazard. They also get a brand new dose of thrills in Shangri-La, our latest Zombies offering, packed with deadly traps and dark secrets buried within the shifting walls of an ancient and mysterious temple.”