Shoot Me! The Loss Of Gracie At UFC 3 (The American Dream) 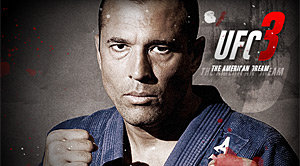 Royce Gracie was back to defend his title at UFC 3. The number of fighters for this tournament went back to eight as it was at UFC 1 (UFC 2 doubled the number to sixteen). The tournament also moved locations. The first two were held in Denver. This time the Grady Cole Center in Charlotte, North Carolina would be the venue. The date was September 9, 1994 and it would be an historic date in the world of MMA and the young Ultimate Fighting Championships.

At the time, everyone was anticipating a duel between Gracie and shootfighter Ken Shamrock. Shamrock lost to Gracie in the semis at UFC 1 and missed UFC 2 due to injury. Fans were seriously disappointed when it was announced at UFC 2 that Shamrock wasn’t on the card as they knew Shamrock was probably the only fighter of the day that stacked up well against the Brazilian and might even be able to beat the jujitsu master.

Again, as with the first two tournaments, you had a stable of mixed disciplined fighters. Jujitsu, shootfighting, sumo, karate, kickboxing, judo, taekwondo would all be represented. But anyone with a brain knew by this time that if you didn’t have skill and technique on the ground, you would be sorely out-classed unless you got lucky.

The tournament rules were the same as the two previous tournaments. Anything goes except for eye-gouging and biting. There were no rounds. Fighters fought until they were knocked out, tapped out, their corner threw in the towel, or the referee determined the fighter could no longer defend himself.

Keith Hackney had a black belt in taekwondo and kenpo karate. This would be his first UFC tournament and one of two in his career (he would return for UFC 4).

As for Emmanuel Yarborough, the sumo wrestler was one of the main attractions of the tournament. People wondered if he would fare better than Teila Tuli did at UFC 1. Tuli got his teeth knocked out by finalist Dutch savateur Gerald Gordeau after he fell to the ground and couldn’t stand back up. Yarborough was a much larger man than Tuli at 6’8″ and a whopping 616 lbs. and played college football as well, so everyone figured he would be a better competitor than the Hawaiian.

Hackney would have to use his quickness and striking abilities to beat the sumo wrestler and that’s exactly what he did. Hackney knew that body strikes would be quite ineffective against a man of Yarborough’s girth so he concentrated on the New Jersey native’s head.

Within a few seconds of the fight Hackney tagged the giant with an open-handed strike to the head which floored the sumo practitioner. Keith then moved in and hit Yarborough again. But Emannuel got a hold of Hackney and from Keith’s back let loose with a flurry of strikes. Hackney weathered the storm and escaped back to his feet. Hackney turned and began punching Yarborough which gave the sumo wrestler time to grab Keith by his shirt. Yarborough stood up and used his weight to shove Hackney against fence. The force of the push broke open the gate.

Referee John McCarthy restarted the men in their designate corners. Hackney then hit Yarborough with another head strike but it didn’t faze the sumo expert. Hackney then changed tactics with kicks to Yarborough’s legs. But this was also ineffective. On one strike Emmanuel seized Hackney’s left leg which opened his head to further strikes from the karate master. It was the opening Hackney needed. Yarborough went down from the head blows and Hackney swarmed the sumo master. With repeated hammer strikes to Yarborough’s head, Hackney forced Emmanuel to tap out. The fight lasted 1:59.

Christophe Leininger was a judo black belt. At the time he was ranked number two in the country at his weight class. This would be his first appearance in the octagon and we wouldn’t see him again until UFC 13 where he lost to Guy Mezger. The two fights would be the sum total of his UFC career.

Christophe Leininger would be Ken Shamrock’s first hurdle hindering his desire to face Royce Gracie. The legendary fight at UFC 1 where Shamrock lost to Gracie was embarrassing for the Pancrase champion. He had been anticipating a re-match ever since. Shamrock thought it would be at UFC 2 but when Ken broke his hand sparring with a team mate, he had to withdraw from the tournament. UFC 3 was his chance for redemption.

The two fighters circled each other for the first seconds until Leininger shot forward at the future UFC Hall of Famer. The two went to the ground with Shamrock getting the better position. Leininger put Shamrock in his guard and began pummeling the Pancrase champion on the top on the head with his fists. The two exchanged head butts, then Leininger attempted a triangle on Shamrock when Ken raised himself to deliver a strike. Shamrock used his strength to break the submission attempt and gained the judo black belt’s back.

While on Leininger’s back, Shamrock got a leg hook but was unable to do much more before the judo fighter twisted back into a half guard position. Ken used the opportunity to lift up and strike Leininger repeatedly to the face. Shamrock forced Leininger into the fence and used his left hand to move the judo expert’s hands away from the protection of his face and used the right to hammer the trapped Leininger. This vulnerability was enough of an incentive for Leininger to tap out before he was seriously hurt. The fight lasted 4:49.

Harold Howard would be the first of many Canadians in the history of the UFC to enter the octagon. He was a black belt in both jujitsu and karate and those skills he would use to make it to the finals of this tournament (along with Royce Gracie’s eventual departure due to exhaustion of course). This would be Howard’s first appearance in the UFC and we wouldn’t see him again until UFC 7 where he would lose to American Mark Hall. The Mark Hall fight was his last in the UFC.

American Roland Paine’s only appearance in the UFC was this one. He was a muay thai kick boxer holding a third degree black belt in the discipline. He was also a crowd favorite being from the area himself.

This fight was an all-out brawl that lasted 46 seconds. Neither fighter had any wish to use any defensive skills. It opened with Howard landing a straight left to the shorter American’s head then it went full-tilt from there. Howard followed with a straight right which backed up Paine toward the fence. The American then shot forward with double hooks on the legs of the Canadian bringing Howard to the floor. Howard used his backward momentum to flip Payne off and then quickly regain his feet.

Howard saw that Payne was still on the ground so he rushed in and as Payne was trying to stand, Howard nailed the American to the head with a knee. Payne grabbed Howard’s legs and brought the Canadian back to the ground. Payne then gained side control but Howard under-hooked the Americans right limb and turned him over. Howard landed a right fist as he stood. Payne held Howard’s left leg as he raised up with the Canadian taking an elbow to his exposed back.

Withstanding the elbow, Payne again hooked the Canadian’s legs meaning to bring Howard back to the ground but Howard hugged the American, fell backward and again reversed the take down. Both fighters gained their feet and like a charging bull, Payne rushed Howard attacking with low kicks. The Canadian backed up to lessen the impact and while on the fence let loose with some devastating upper cuts and straight rights to the American’s head. The strikes downed the American and Howard followed up with an hammer fist before referee John McCarthy stopped the fight.