Tomb Raider Reboot: Is It Time To Catch Up To Uncharted? 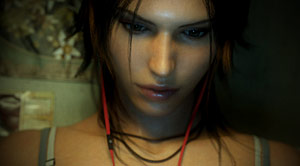 The Tomb Raider series has gone through many highs and lows. But lately its been more miss than hit. In this latest reboot, you play a younger, less-seasoned raider of tombs. The E3 2011 Tomb Raider Gameplay Demo shows a darker and inexperienced Lara as she tries to stumble her way out of a dire situation. She’s shipwrecked and captured by natives on a mysterious island. It’s trial by fire and a hell of a learning experience for the young Croft.

Tomb Raider seems to be playing catch-up to the Uncharted elephant in the room. Let’s face it, I don’t remember the last time I gave a damn about Tomb Raider. For the longest time, they’ve become generic action/adventure games with ridiculous premises and clunky controls.

However, in this new installment, it looks like they’re trying to hit all the right notes, especially in regards to Lara. This new art style makes her look relatable and believable. She looks vulnerable and human for once, instead of the bosomy plastic doll we’ve gotten accustom to. For what they’ve showed so far, the developers are genuinely trying to make us care about Lara. And it’s working. I can’t wait to see more.