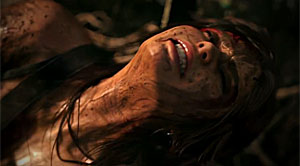 Armed with only the raw instincts and physical ability to push beyond the limits of human endurance, Tomb Raider delivers an intense and gritty story into the origins of Lara Croft and her ascent from a frightened young woman to a hardened survivor.

Fresh from academy and in search of lost relics, a 21-year-old Lara Croft journeys to an island off the coast of Japan aboard the Endurance, a salvage vessel helmed by Captain Conrad Roth. Before anchoring at bay, the ship is cleaved in two by an unforeseen storm leaving Croft separated from any other survivors and washed ashore. She must endure physical and emotional torture in order to survive the island.

What do you think of the new Lara Croft? Comments are open below.