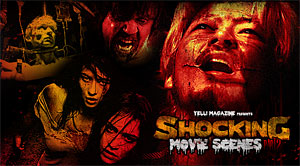 We welcome you to the second part of one of our growing series at Yell! Magazine that we treat with bloody tenderness, our Shocking Movie Scenes. In our previous top 10 list we covered the scenes from Marathon Man, Straw Dogs, Pulp Fiction, and the one that conquered it all was Cannibal Holocaust in which we concluded the entire film was too much to bear.

In this part we challenged ourselves to bring you shocking movie scenes from modern, and classic films that were produced in various countries around the globe. We could of easily listed 10 films from Italy, France and Japan that are known to praise this theme. So we looked back into our collection of memories, and discovered some great findings that we think are worthy mentions for shock. We hope you agree with the list and share your thoughts with a comment or two below.

Yes, the Hungarians can shock as well, and Taxidermia is the best, and possibly the only film to prove it from this country by my knowledge. The film is cut up into small story segments that surround a perverted family saga that symbolizes historical events that happened in Hungary since WWII. If you know nothing about the history of Hungary, this movie will fail you miserably. Although Taxidermia is more grotesque than shocking, the many bizarre moments are similar to a Harmony Korine film and would be admired by likes John Waters.

The final self-taxidermy scene is a true shock finale that will linger in your mind for years to come. The scene above won’t give full justice until you fully understand why the suicide happens, and what it leads to (the video also stops during a circular saw comes into play). If you want to get the full shock effect, you will have to watch the entire film.

No.9 Let me finish her off in the oven

Lucio Fulci once was a medical student and an art critic before he became the cult director in splatter with films like House by the Cemetery, The Beyond, and City of the Living Dead. Directors like Lucio with a background unrelated to cinema that become successful by a cult following in his case, always mind-boggled me. I could never come to understanding how they became masters in horror such as Wes Craven who was a teacher and a taxi driver at an early point in his life. Perhaps they have deep depressing inner thoughts that drive them to make horror magic, and I’m thankful for it. In Lucio’s case, budget issues were a recurring situation unlike his peer Dario Argento who seem to have more money for his films.

Touch of Death also known as When Alice Broke the Mirror (in original Italian, Quando Alice ruppe lo specchio) is an unusual black horror comedy by Fulci that is either liked or disliked by his fans. Actually, most of his films are polarizing. This scene has the traditional excessive gore, including the tight shots and Fulci’s fascination with eye balls. It has more blood and guts than shock, but it had to be included since it was shocking at its time of release for TV, which might just be why the original print can’t be found and a proper digital transfer can’t be done. It apparently might have been filmed on videotape.

Inside is possibly the strangest extreme horror film coming out of France in the recent decade. If you stay away from reading the plot, I guarantee you will find Inside to be brutal and a shocking venture into a unique horror experience. Bloody Disgusting also ranked it 12th on their list of the Top 20 Horror Films of the Decade. With that said, if you haven’t seen Inside, avoid reading the scene description below since it will spoil the film for you.

In a very short summary, Inside is about a mysterious attack and home invasion of a young, pregnant woman (Sarah) by a stranger who seeks to take her unborn baby. This gruesome concluding scene from Inside pretty much made the weapon of choice, “scissors,” the newest iconic weapon in horror film in the last decade. Throughout most of the film, Sarah is taunted with the scissors, especially at an earlier point in Inside, the attacker captures Sarah on a bed and starts pressing the tip of the scissor to her belly button. That’s the moment you actually realize this psycho bitch really wants her baby — and she will do whatever it takes to have it. By the end, Sarah starts to give birth and the baby gets stuck. Desperate to save the child, the attacker proceeds to perform an impromptu Caesarian on Sarah with her scissors, and cuts her open. Yes! I agree it’s unbelivable and shocking. Not to be viewed by any couple who is seeking to have children.

We couldn’t find a video for the scene description above, but we hope the picture we’ve drawn is enough to get your mind thinking on how this actually went down.

Pretty fucked up don’t you think?

No.7 Did any blood get in your mouth?… Mark?

One of my favorite moments from 28 Days Later, which is also an effective shocking mind-fuck scene created by the brilliance of Danny Boyle, is the moment after Jim reads the suicide note left behind by his parents at their house. Two infected attackers intrude the home and attack Jim and Mark. Selena helps Jim out with her machete, and soon after realizes Mark has been cut or bitten with a good chance of infection.

In a split second, Selena plays god, and decides the fate of Mark with her machete. This is when we find out that Selena means business, and she will do anything to survive the infection, even if it means taking out friends along the way. Poor Mark didn’t even get to say goodbye.

No.6 I am death. Vengeance is mine.

Black Death is a recent historical horror film by director Christopher Smith that takes places in 1348 in a plague-ridden medieval England. It stars Eddie Redmayne (Osmund) and Sean Bean (Ulrich). They, along with a group of mercenaries, travel to a remote village free of the plague. It is rumored to house a witch who raises people from the dead and the group is sent by the bishop to investigate. Ulrich goes to bring the village back under the Catholic faith or be the instrument of God’s wrath on the pagan believers.

When Ulrich is captured by the villagers he is bound by his arms and legs to horses. The witch (Marianne Graffam) stretches him out to torture him into renouncing God. After a few moments of being stretched, he cries for them to stop. He asks to speak to Osmund who he directs to tear open his shirt. Revealing that he is a sufferer of the plague and because of it the village is now infected, Ulrich raises his head to the sky and yells, “God’s fury rains down on you!” The horses are slapped and Ulrich is ripped apart.

Find out which shocking scene ranked No.1 on the next page…