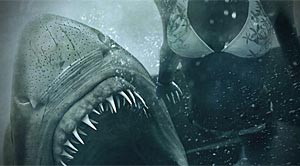 What’s not to like about David R. Ellis’ new film due out in September? It has hot babes, killer sharks and lots of blood. A trifecta of terrific terror for those who suffer from galeophobia. Add to it the fact that those swimming menaces will be jumping out of the screen at you thanks to the wonderful benefits of 3D and who wouldn’t get just a bit excited.

Usually we pan films that rip off others of the genre, but every once in a while we take off our critic’s hat and just enjoy the film for what it is. A fun waste of time. Shark Night has a similar storyline as Deep Blue Sea, that is genetically engineered sharks are hell bent on eating as many human beings as possible. But this time the action takes place on a lake rather than the middle of the ocean.

Ellis is no stranger to the jovial horror film having directed two of the Final Destination films and Snakes on a Plane. so it won’t be too much of a stretch to assume that Shark Night will be just as much fun. Having Sara Paxton, Christine Quinn, and Katharine McPhee in and out of their bikinis is an added bonus.