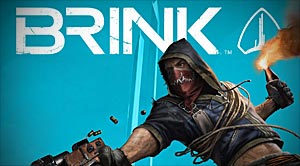 Homage: ”Something that shows respect or attests to the worth or influence of another.”

They say imitation is the sincerest form of flattery. Which somehow fails to explain why I got sent to the naughty corner of the room whenever I cheated off my classmate’s test. What? It was my way of honoring all of his work …by copying it and calling it my own. You say cheating I say homage but Mrs. Lorraine called it “cheater, cheater, pants on fire” and whacked me with her ruler. One thing us cheaters learn early on, it’s the knowledge that our work will aways be inferior to the original. Try as we might, we’ll never be able to capture the eloquence of little Patrick’s thesis on why his summer vacation rocked so much harder than ours. It’s the fate that awaits every copy, to be inferior in every way, to never contribute anything that isn’t recycled to the world. To be rated a D- while Patrick’s masterpiece gets an A+.

God I hated that kid.

What the hell were we talking about?

Oh yes. Brink. A rip-off of a much better game.

Brink, released by Bethesda and created by the team at Splash Damage, bills itself as an online multiplayer first person shooter, where up to 16 players can slaughter each other like happy little maniacs off their meds on a variety of different maps and using a bundle of gameplay styles.

If the words “TEAM FORTRESS 2” just popped over your head in big, neon lit letters and an orchestral score, congratulations! You’re as familiar with the current standard bearer of cooperative online shooters as the team behind Brink so obviously is. However, if a giant green crystal popped over your head instead, I’ve got bad news: you’re a Sim and therefore have no control over your own fate. Your entire existence is at the mercy of a capricious player who will likely leave you face down in a pool of your own pee in an apartment he couldn’t bother buying furniture for because he’s the type that likes pulling wings off flies. But enough about me.

Yes, to call Brink similar in every way, shape and form to Team Fortress 2 would constitute a criminal misuse of the word “similar.” The guys at Bethesda studios have peeked at their competition’s term paper and retitled it Brink. It’s Patrick the class favorite all over again!

The question facing this reviewer is: do I remain silent and judge the game on its own dubious merits? Or do I blow the whistle to get on Mrs. Lorraine’s good side and score some brownie points? Such a terrible conundrum….

The Storyline, or the lack thereof:

Normally, at this point in a review, I like to ramble on a bit about the game’s storyline. While Brink does feature a barebones attempt at linking together the various maps and factions in the game, it does so almost as an afterthought. The overarching plotline goes something like this: The planet Earth is screwed (What? Again?) and worldwide famine and general nastiness are the words of the day. Also, that whole climate change thing the hippies were always going on about? Yeah, turns out they were on to something. The fat lady is clearing her pipes and Death, War, Pestilence and Snooki are saddling the horses. But all is not lost! There’s a utopian floating megacity called The Ark and there’s all sorts of good stuff on it. Plus, it’s in international waters so that means gambling and hookers. SOLD!

It’s like Vegas! Only with less slot machines and more wanton carnage.

Unfortunately, The city is soon filled to overcrowding with refugees from every port. It doesn’t take long for the social niceties to break down. The Ark is soon turned into a warzone between its internal Security forces, who are only interested in keeping the peace and the scrappy Resistance who just want to plunder The Ark’s resources and set sail for the horizon. (Wait, I thought the Earth was a flooded wasteland? Where are they gonna go? Oh right, it’s a shooter, don’t think about it too much.)

You can play as either the cops or the robbers in this scenario but what it all boils down to is that mission objectives for one side will always be the opposite for the other.

Help! Help! I’m being repressed! Come and see the violence inherent in the system.

Resistance wanna blow up a generator? Up to Security to stop them. Resistance trying to blow up a Bieber concert? Yeah, Security’s probably gonna go AFK for that one…

Objectives are tied together with meager cutscenes which you’ll get tired of right around your second viewing. Nice touch: the team you win a map with is the team that will show up during these in-engine cutscenes.

Read the gameplay and verdict on the next page…