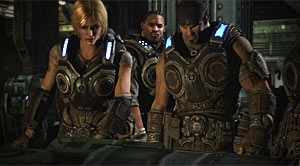 Brand new action-packed trailer for Gears of War 3 is here to gradually seal off the campaign of the trilogy finale. This gripping Gears 3 trailer has a classic ’70s track by Black Sabbath called “War Pigs” which has been talked about, and teased for months now.

For us it’s an excellent song choice since we are fans by nature and hardcore followers of Sabbath. Even Phil Anselmo from Pantera would gave a 110% approval on it without a doubt.

Now the time is here for you to watch the trailer, and tell us if you think “War Pigs” is a perfect song choice in the comment section below.

Microsoft and Epic Games previously announced Gears of War 3 surpassed one million worldwide pre-orders, making it the fastest pre-ordered Xbox exclusive title to reach this milestone in the history of the platform. Helping propel Gears of War 3 pre-orders worldwide, 1.29 million fans from more than 143 countries answered the call to join the public multiplayer beta, logging more than 249 years worth of gameplay over Xbox LIVE. – Source: gearsofwar.xbox.com