The Dark Knight Rises: Tom Hardy Is Bringing Back The Bulk From Bronson For Bane 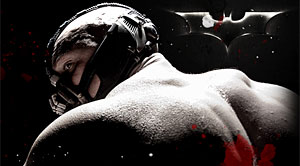 This is what happens when you pump a prisoner full of drugs in a movie by Christopher Nolan. You get a bulky Tom Hardy, as Bane, who’s ready to brake Batman in the upcoming sequel The Dark Knight Rises. The last time Hardy was this big was in the film Bronson in which he also played a notorious prisoner Michael Gordon Peterson, who was re-named Charles Bronson. A man in the United Kingdom who is known for having spent almost his entire adult life in solitary confinement.

Hardy needed to gain 30lbs of muscle for the character, and judging by the first picture revealed on the official website of the film, he accomplished it.

Christopher Nolan started to shoot The Dark Knight Rises yesterday, and a successful viral campaign began on twitter by tweeting the hashtag “#thefirerises” that revealed a mosaic of Bane on the site.

Also check out a picture gallery of the Catwoman, or discuss The Dark Knight Rises below in the comment section.