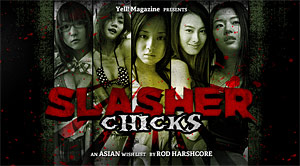 We at Yell! Magazine love Slasher films. But it mostly seems to be a North American phenomenon with occasional forays into Europe and Australia; at least in fame and popularity. Although Asia produces numerous horror films of a high caliber, the slasher film doesn’t seem to hold much merit. I could be wrong but can you name a Japanese, Hong Kong, South Korean, Filipino or Thai equivalent to Jason, Freddy, Michael or Ghostface?

Well why wait for those directors across the Pacific to get it into their heads that us horror fans want some Asian slasher movies starring twenty-something hotties running and screaming in a futile attempt to escape a masked killer sporting a samurai sword. With this article, we at Yell! Magazine hope to get them thinking about it. It’s also a great excuse to show some Asian beauties as well.

Here are Yell! Magazine’s ten picks of who we would like to see get naked and ripped apart in a future Asian slasher flick.

Born in Chiba, Japan, this 25 year old Asian beauty gained her notoriety for her large cup size, modeling and having starring roles in her own swimsuit videos. But we would much prefer to see her vainly attempting to fight off a killer in a bathroom after exiting the shower.

Summakul became well known in modelling circles after appearing on the cover of the August ’07 Thai publication of Maxim Magazine. But we would much prefer to see her decapitated by a chainsaw-wielding murderer while in the backseat of a car doing the nasty with her her boyfriend.

This Japanese actress made her name in the adult video world before starring in the now famous horror flick Big Tits Zombie where she was slashing her way through the undead for for over 90 minutes. Now we would like to see her on the receiving end of all that gore.

Born in Macau, this Chinese beauty is best known to American audiences for her role as Lin in The Mummy: Tomb of the Dragon Emperor. But wouldn’t it be much more fun if she was on the losing end of a sword fight with a masked marauder?

Another Japanese hottie from the AV world, she was born in Kumamoto Prefecture back in `86. She would be perfect for a slasher flick showing off those huge titties before being gutted by a masked villain.