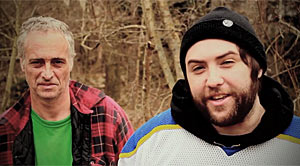 A new video just recently got uploaded to YouTube featuring director Jason Eisener (Treevenge, The Teeth Beneath), and David Brunt, the original hobo from the Hobo with a Shotgun fake trailer. The new king of the exploitation genre is using every trick in the book to help promote his feature film with a trailer contest, exposing himself in a late night Q&A on reddit, and in his recent attempt answering the top three fan questions on video.

If you still haven’t seen this splatterhouse, be aware that this video does contain spoilers, and the last question opens up to a never before seen footage from the film that will most likely be included with a shit load of other extras on the Blu-ray/DVD release.

Enjoy the video and if you have any comments feel free to post them below.