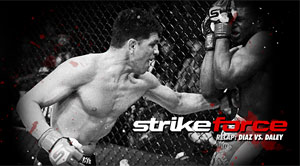 Diaz dispatched upstart British challenger Paul Daley with just seconds remaining in a scintillating first round of their Welterweight title fight. As expected, the main event bout featured fierce exchanges in the stand-up and may prove to be Fight of the Year.

Melendez attacked from the first second of the fight throwing power punches that repeatedly landed, damaging Kawajiri early and often. Following an onslaught of punches that dropped the Japanese challenger, Melendez unleashed a series of vicious elbows forcing the TKO in the first round of the championship fight.