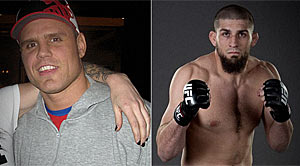 It looks like Canadian Jesse Bongfeldt will have his work cut out for him come this June in Vancouver. It was announced by the UFC on March 12th that Bongfeldt will face Tuff’s eleventh champion Court McGee at UFC 131 on June 11th, 2011 in Vancouver, British Columbia.

McGee is a 26 year old who had a bit of luck to win The Ultimate Fighter 11 back in June of 2010. He lost his preliminary bout against Nick Ring. But when Rich Attonito broke his hand, McGee was submitted in his place for the quarter-final fight. He beat James Hammortree to win the match then went on to best Brad Tavares in the semi and Kris McCray in the final to take TUF 11.

Mcgee was then added to the card for UFC 121. He faced Ryan Jensen and beat his fellow American by submission (arm triangle choke) in the third round.

Bongfeldt last fought in UFC 124 vs. Rafael Natal. Although clearly winning the fight, the judges called it a draw. It was Bongfeldt’s first UFC fight after competing in his native Canada.