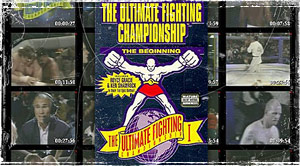 Shamrock’s win ended the first round of fights. Four combatants were eliminated and four remained. This set up the contests of Gerard Gordeau vs. Kevin Rosier and Royce Gracie vs. Ken Shamrock to see who would make it to the championship bout.

Rosier wasn’t much of a match for Gordeau even with Gordeau’s broken hand. Still recovering from his first match, Rosier didnt have much energy to defend himself from Gordeau’s leg kicks and accurate punches. A combination of a left and straight right put Rosier on the ground. Then a roundhouse kick and an elbow put Rosier in serious trouble. Gordeau continued striking and the referee called it at 0:59 of the first round. 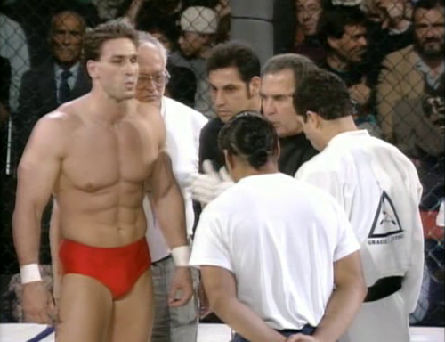 The match that everyone thought would be the most exciting to watch was this one between two fighters who could grapple and fight proficiently on the ground. This fight, just as all the others, ended quite quickly.

Gracie shot forward almost immediately after the bell sounded, but Shamrock defended well. Shamrock then brought Gracie down using brute strength but Gracie escaped immediately and stood back up.

Gracie then bear-hugged Shamrock bringing him down to the ground into his guard. Shamrock again used his strength to stand but he left his arms exposed and Gracie tried an arm lock but fails as Shamrock went for his leg. As Shamrock leans backward to lock Gracie’s leg, Gracie pushes forward joining the momentum Shamrock created.

Gracie then mounted Shamrock. Shamrock continued working on Gracie’s leg but he left his neck exposed and Gracie applied a rear naked choke to submit the Shootfighter. It took all of 57 seconds.