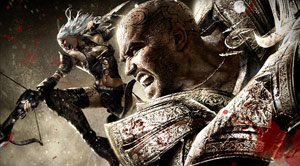 Brink, an immersive first-person shooter under development at Splash Damage, will be available in North America on May 17th and in Europe on May 20th. Brink was named as the ‘Game of Show’ at Eurogamer Expo 2010, while G4TV.com declared “Brink takes shooters to a whole new level.” Blending single-player, co-op, and multiplayer action into one seamless experience, Brink features dynamic battlefields, extensive customization options, and an innovative control system. Hunted, a fantasy action game, will be available in retail stores across North America on June 1st and on store shelves in Europe on June 3rd. Hunted is a fresh take on the classic dungeon crawl experience that delivers the intensity and action of a modern-day shooter. Hunted, under development at inXile Entertainment, has been called “A Dungeon Crawl for the Gears Age” and has also been described as “violent, deceptively thoughtful and witty.”