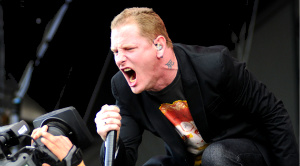 It’s still up in the air and open to speculation, but Corey Taylor could be Velvet Revolver’s next frontman. It’s been reported that Velvet Revolver is working with a “known singer” and if it is Corey Taylor, it’s honestly refreshing to see that Slash, Duff McKagan, and Matt Sorum aren’t looking to replace Scott Weiland with a clone. Equally as refreshing, it’s nice to see some relatively new metal blood mixing with some old-school legends.

But to answer the question if Corey is joining Velvet Revolver or not, all he had to say when Billboard.com poised the question to him was “to be continued,” which was followed by a hearty laugh. Elusive, but intriguing. Being a fan of Guns N’ Roses and Stone Temple Pilots, I’ve had a modicum of interest in Velvet Revolver, in addition to some interest in Slash and Duff McKagan, and in recent years I’ve come to be highly enthusiastic where Corey Taylor is involved, from Slipknot to Stone Sour, and am truly excited about the possibility of these metal forces coming together.

What would it mean for Velvet Revolver to have Corey onboard? The former Gunners come from a more traditional sort of rock/metal background than Corey, who was, no doubt on some level, influenced by Axl and the gang. I don’t believe that Corey would be vetoed at every turn or that his creative direction would be completely ignored within the confines of this super group, but I don’t think that he would have free reign to the band’s output either. No doubt, the fusion of these forces will forge a unique and interesting sound, one that I’m anxious to hear.

Even if the Corey Taylor and Velvet Revolver rumor turns out to be bunk, you’re still going to hear a lot from Corey in the coming year. Along with Slipknot, Corey will be playing three dates at the Sonisphere Festival and might be playing Rock in Rio. Additionally, he and Stone Sour are currently on the Nightmare After Christmas tour and later this month they’re heading to Australia to play the Soundwave Festival. In late March, Stone Sour will be on the Avalanche Tour. If that weren’t enough to keep the man busy, he’s also putting out a book (slated for July 12, 2011), which is titled The Seven Deadly Sins: Settling the Argument Between Born Bad and Damaged Good. Plus there’s talk of Stone Sour and Slipknot hitting the studio for new albums. If Corey isn’t careful, the Six Degrees of Kevin Bacon will need to adopt his name.