Monster: Kanye West’s New Song Is On A Killing Rampage 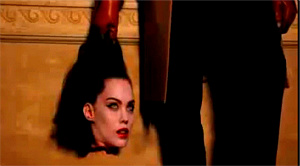 The Jake Nava-directed video for Kanye West’s new song “Monster” (featuring Rick Ross, Jay-Z, Nicki Manaj, and Bon Iver) is killing it on the Internet today and I suspect on-the-job productivity is way down due to the compelling nature of the video; not only is it amazing to watch, but it’s also a killer track with a beat that keeps your head bobbing and a lyrical flow that makes you want to fight.

Sure, the title of the track alone, “Monster,” caused our ears to perk up since it grabbed at our horror sensibilities, but once we saw the video and realized that it actually did feature monsters, well, we just had to share it with our readers. As a bonus, the rappers actually use the monster/horror theme throughout, though the monster they’re talking about isn’t exactly the kind we’re used to. Still, how can we ignore it when Jay-Z refers to himself as “Sasquatch, Godzilla, King Kong, Loch Ness, goblin, ghoul, a zombie with no conscience/Question, what do all these things have in common?/Everybody knows I’m a mutha fuckin’ monster.”

And who is that drop-dead gorgeous woman dragging a body across the floor?

OK, check out Kanye West’s “Monster” for yourself and let us know what you think in the comments section below.