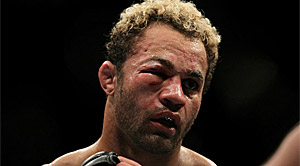 The reigning UFC Welterweight Champion Georges St-Pierre successfully defended his title for a fifth consecutive time as he wiped the blood off of the Octagon floor with Josh Koscheck. GSP put on an absolutely superb performance against an opponent that had clearly gotten under his skin. For a third straight fight (and five out of his last eight wins), GSP was unable to finish his opponent, however, that shouldn’t even be up for debate as he absolutely worked Koscheck for the entire fight, making his face look like something you find in a butcher’s shop.

At the post fight press conference, GSP stated that he was happy with the win but that he was still very disappointed in his performance for not finishing Josh Koscheck by KO or submission. In Koscheck’s defense, GSP has said that his opponent had a lot of heart and was incredibly tough. To endure five rounds of total abuse the way Koscheck did, the word tough would seem like an understatement.

When all was said and done, GSP also addressed the trash-talking issue on the part of Koscheck and reiterated that in the end there were no hard feelings because it was just business, and that he has the greatest respect for Koscheck for not only coming into hostile territory to fight him, but also to withstand five rounds of total abuse.

When asked about Jake Shields, which in all likelihood will be GSP’s next opponent, he said that Jake is a great fighter and definitely the top contender for his belt. Shields cleaned house in STRIKEFORCE in both the Welterweight and Middleweight divisions, and managed to squeak out a win in his UFC debut. Look for GSP vs. Shields to possibly headline the UFC’s first foray into Toronto, Ontario, Canada.

All in all, UFC 124 was an incredibly entertaining card, with nearly every fight putting 23,000 plus fans on the edge of their seats. As is always the case when the UFC hits Canada, the fans made the night all the more memorable with their energy and excitement. As Dana White likes to say, he absolutely loves coming to Montreal… even if it is 20 below and snowing outside.