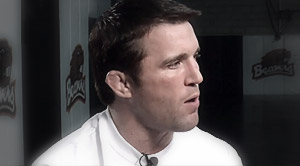 Since being accused and suspended by the California State Athletic Commission last September (2010) for taking steroids, Chael Sonnen has chosen to stay silent. Citing his appeal as the reason, fans and reporters alike waited patiently for the process to be over.

On December 3rd, the appeal concluded and resulted in a reduction of Sonnen’s suspension from a year to six months. The $2,500.00 fine remained unchanged. This means Sonnen can return to the ring on March 11th, 2011 as he has already served approximately three months of his suspension.

With the reason for Sonnen’s silence removed, he has finally spoken to the media. At the top of the article is HDNet’s MMA Live’s interview with Sonnen discussing the whole ordeal.