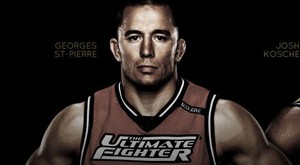 The Ultimate Fighter Episode 12: The Semi-Finals

After a week off due to the holidays, TUF 12 returned with the last of the tournament fights. Both semi-final fights took place with the winners vying for the crown of The Ultimate Fighter on the TUF 12 finale taking place on Saturday December 4th, at 9 p.m. EST free on Spike TV.

The first fight to take place was Jonathan Brookins against Kyle Watson, with GSP once again not cornering any of the fighters. Brookins is the favorite in this fight due to his ever-evolving skills and versatility as a complete fighter. Watson still has all the tools to get the win, but is lacking some skill compared to Brookins.

Before the fight begins, we are shown a scene from the house where Marc Stevens of Team Koscheck (and a few of the other Koscheck team members) are dissatisfied with the lack of training they have received from Koscheck and Team GSP received a ton of training from GSP and a handful of special guests. Stevens proceeds to impersonate Koscheck and make fun of him to the delight of Team Koscheck members. Stevens gets a bit of a surprise when Koscheck walks into the house to hang with his team, and pretty much catches Stevens in action. For a change, Koscheck actually doesn’t get bothered by it and states that he will let Stevens slide for this one. After the house drama, the fight between Brookins and Watson gets underway.

As the fight begins, both fighters are a bit cautious of each other, but Brookins pushes the action by going for a takedown and getting rocked by Watson in the process. The punch doesn’t fade Brookins as he manages to get a takedown on Watson regardless. The fight gets back to the standing position, but not for long as Brookins scores another takedown. This time the fight stays on the ground for the remainder of the round with Brookins dominating the whole way. Brookins easily wins the round.

Round 2 starts where Round 1 left off, with Brookins shooting for the takedown and eventually getting it. The round is spent on the ground as Brookins controls it in its entirety, landing multiple elbows and punches to Watson’s head. Brookins maintains full control for the entire round winning it in very dominant fashion.

Round 3 is much of the same, as Brookins gets into familiar territory by completely controlling Watson in all facets of the fight. There is a tiny glimmer of hope for Watson in the round when he lands a successful combo on Brookins, but it doesn’t really faze him and Brookins continues to dominate the round. Brookins easily wins the round, and the fight, as he takes the unanimous decision victory.