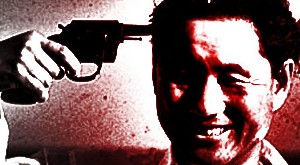 Takeshi Kitano is Japan’s greatest media personality. Although it would be difficulty to find anyone in Japan who didn’t know about him, he is practically unknown in North America. Kitano began his career on stage mentoring under Fukami Senzaburo. He then teamed up with Kaneko Kiyoshi (“Jiro”) to eventually become the comedy duo The Two Beats. He then moved to acting in television and film until the fateful day he was asked by producer Nabeshima Hisao to direct Violent Cop.

Did you know that Takeshi Kitano made a video game? It was called “Takeshi No Chousenjou” published by Nintendo Famicom. The plot of the game involves a perfectly ordinary businessman who gets fired from his job and, in the end, finds treasure on some island.

Takeshi Kitano had never trained as a director; he learned it on the fly and his early films showed this learning process. One of Kitano’s trademarks is the static camera. He used it less for aesthetic purposes as more for the ease in shooting a scene. He also fell in love with the long take for the same reason. These two habits were less and less utilized as he became more comfortable in the director’s chair, but they never totally left his repertoire.

Another trademark of Kitano’s filmmaking process is his tendency to have scenes filmed by the ocean. He explained in an interview once that it was more because Japan is so small and surrounded by water and, therefore, hard to avoid rather than a personal love of the ocean.

Quentin Tarantino brought Sonatine over to the U.S. market through Rolling Thunder Pictures. He also wrote the prologue and epilogue on the double feature DVD release Zatoichi/Sonatine.

Reasons for Watching the Movies of Takeshi Kitano

Takeshi Kitano is one of those rare directors who is also a writer and actor. Not only can he write, direct and act in all of his films if he so chooses, but he also has the talent to cross different genres. Although he started in comedy, he is also comfortable in crime, drama, action, and more experimental films.